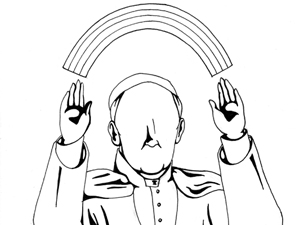 While holding hands with a former girlfriend on a Los Angeles metro rail, a middle-aged woman pushed toward the front of the metro car to face us. She screamed verses from the Bible. At first, passengers stared at the unfolding drama. As minutes turned an amusing spectacle into an awkward moment, they began to avert their gaze from us and pretend to ignore the screaming woman.

I looked left, right and behind me to make sure she was directing her anger at me. How could I possibly have wronged a person I’ve never met? Was I the center of a “What Would You Do” plot? Unfortunately, ABC’s John Quinones didn’t come out to stop the screaming actress and interview the passengers about their reactions.

At that point in my life, I was careless and naïve about the extreme reactions to same-sex couples’ public display of affection—even the subtlest expression of it. I had enough sense to recall gay bashing horror stories and retracted my hand from hers when I realized why the woman was wailing biblical verses at us. We sat docile and silent along with the rest of the passengers and waited for it to be over.

My mother warned me those kind of people existed, but they were so far from my adolescent reality. In retrospect, I should have retaliated in a pie-in-the-face fashion, a political act made famous by Anita Bryant (main figure of an anti-gay campaign in the 1970s). Bryant also orated biblical references in her arguments against LGBT rights and equality.

With the context of Catholic Church’s attitudes on homosexuality, Pope Francis’s statements made in July of this year were surprising and seemingly accepting in comparison.

Francis answered reporters’ questions in the back of a plane headed from Brazil to Rome. He appeared in headlines worldwide with his statement regarding gay priests.

“If someone is gay and he searches for the Lord and has good will, who am I to judge?” Francis said.

Some news headlines were misleading. They read, “Pope Francis on Gays: Who am I To Judge Them?” Celibate gay priests may have felt reassured by his comments even though Francis was not referring to the entire LGBTQ community.

I was curious to hear Francis’s thoughts about sexually active gays and lesbians, who believe in the same God. I wondered if he would ever address transgender individuals. Francis’ statement was inclusive of gay priests at best, and vague about the LGBTQ community at worst.

Last Thursday, Francis expanded on those July statements. He emphasized he was referring to the LGBTQ community in general, not only gay priests.

“Religion has the right to express its opinion in the service of the people, but God in creation has set us free. It is not possible to interfere spiritually in the life of a person,” Francis said.

Although some received the remark as progressive, it isn’t radically divergent from Pope Benedict’s beliefs. Francis admitted he is following the same catechism Pope Benedict followed.

The shift from Benedict to Francis is not in attitude, but in tone.

Francis’ remarks were weak in comparison to former Archbishop Desmond Tutu’s statement on homosexuality in July during a United Nations Free and Equal campaign promoting rights for the LGBTQ community.

“I would refuse to go to a homophobic heaven. No, I would say sorry, I mean I would much rather go to the other place,” Tutu said.

Tutu claimed he would not worship a homophobic God. He compares the issue to the apartheid, a policy practiced by South Africa to racially segregate.

Francis’ tone on homosexuality might snuff some anti-gay believers from yelling at LGBTQ couples on Los Angeles metro rails. However, a retort on LGBTQ political rights shouldn’t be based on religion.

Even though Francis and Tutu’s statements are encouraging to the LGBTQ community in relieving tensions between LGBTQ identity and religious doctrine, a separation of church and state in the LGBTQ rights political debate is crucial for progression.