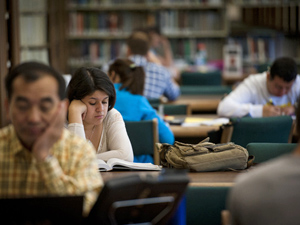 The total number of transfer and freshman students enrolled this semester is 5,241

Other CSU data is pending because their census has yet to be completed. However, school officials suspect that numbers are up across the board.

“Odds are Fullerton is [up] and Cal State LA is as well because the LA campuses typically respond in a similar fashion,” said Harry Hellenbrand, provost and vice president of Academic Affairs. “I would guess we’re all heavily enrolled in this term. I know Dominguez Hills is. We won’t know the numbers for sure until about another week or two.”

Internally, several areas within CSUN have been impacted by the growth in student population, particularly the library, SRC and freshman level courses.

“I’m not sure we really know the cause. There are a couple of things but they’re hard to say,” Hellenbrand said. “The number of applications is up, so that means we’re getting more students applying, so there will be more accepted.”

A-G completion rates are up in high schools, Hellenbrand added, and more students are enrolling from outside the area.

Additionally, population trends in community colleges (CC) and the UCs have impacted this semester’s growth.

“The percentage of first-time college students in the LA area who are going on to community colleges has gone down in the past couple of years by about one or two percent, and our numbers and the CSU have gone up about one or two percent,” Hellenbrand said. “Therefore, it looks to me like they’ve shifted where they’re going, and the UC numbers are down slightly, and we’re up slightly.”

Small demographic changes from CCs and UCs had cumulative effects on the increase.

In anticipation for the increased enrollment, school administrators have introduced an electronic waiting list to simplify the rush to fill classes and get needed schedules.

“The waiting list had such an impact,” said Hellenbrand. “We grew to 105.5 percent of our target by the second week, and we haven’t changed since then. Normally the second and third week, we continue to grow. That didn’t happen this year, and that’s because students were able to switch their classes and adjust their schedule fairly quickly. The waiting list really helped that a lot.”

What’s more, anticipation of the demand for classes prompted officials to hire more part-time faculty to fill the need of impacted classes, GE courses being the most affected.

Pending a deeper analysis of the data for new hires, Hellenbrand suspects about 75 new hires were added to relieve the added demand.

SRC director, Jimmy Francis, noticed an increase in the volume of students using the gym.

“The only area where there has been a decrease for daily averages is on Mondays,” said Jimmy Francis, director of the SRC. “All other days have seen greater than a 10 percent increase in participation,” based off of a four-week average for fall 2013.

Total student enrollment at the SRC for the Fall 2013 semester is up by 21 percent from last year at this time, Francis added, totaling 25,377 students registered at the gym. SRC officials were forewarned of the increase.

“We were alerted several weeks before the semester started. They gave us the specifics,” said Francis. “We didn’t do anything different, just prepared everyone that it was going to be more people. We staffed extra people for the front desk for the first couple of weeks.”

The Oviatt Library has also experienced a high volume of student traffic, attributed to both the increased student population and the addition of the new Learning Commons.

Library gate counts for the first three weeks of school were in the tens of thousands. The number of library visits totalled 31,492 the second week of school, and 44,004 the third week of school. These figures reflect the number of times a person entered and exited the library; library employees and faculty visits are included in these figures as well.

“I definitely think our numbers in the library increased,” said Marianne Afifi, associate dean of the library. “We’re still collecting the data. Four thousand people (entering the Oviatt per day) is something I could say happens here. It’s an estimate at the moment.”

With the addition of new services, the first floor of the library has seen the greatest demand, and the increase in student population is only partially the cause of that demand.

“On the first floor, the impact has been tremendous because we have the IT desk and the laptop lending, so the impact has been good,” said Afifi. “We have a new library and we have this IT desk, but also, just because we have more students, obviously, they’ll be coming in and using our services, so our services are impacted: our desk services, reference desk, IT, laptop lending, or music and media reserves.”

Forewarning has helped in relieving the demand. Library officials receive updates on student numbers from the Office of Institutional Research each week, she added.

“My service desk people haven’t told me that they can’t keep up with the service, so I think we were ready to start with and we just anticipated bigger crowds,” said Afifi.

Still, several variables from the student’s point-of-view complicate how administrators approach the organization of the school. The added volume only exacerbates those concerns in predicting demand from one year to the next.

“We have to make sure that freshman English and freshman math are  sessions available around the clock because we have people who are working and commuting to campus,” said Hellenbrand. “We can’t rely on people to come here at a set period of time.”