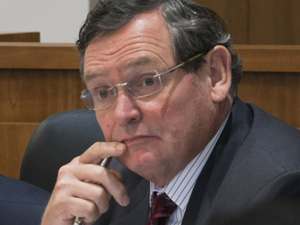 “I don’t think there is a single one-size-fits-all magic solution to any of these problems that we face. I think technology is a piece of it, but having more resources is another piece,” White said.

White began the conference by stressing the importance of  Proposition 30, the bill that raised taxes to help pay for education, and expressed his gratitude toward the students who helped make others aware of the bill and its importance.

“There is more demand for people to join the CSU as students than there is current capacity.

However, I was pleased that we were able to grow our student body this year by about 6,000 students, that in part of Prop 30’s success,” White said. “We thank the people of California for voting yes, but I also thank the students of CSU for working so hard to get the vote out.”

Despite the increase of nearly 6,000 students this year, White acknowledged that more than 20,000 students will be forced to look elsewhere for their educational purposes because they were not admitted into a CSU due to lack of funding.

White and Board of Trustee (BOT) members discussed allocating more money for enrollment in the 2014-2015 school year during the CSU BOT meeting that took place Tuesday and Wednesday of last week.

BOT members wish to eliminate turning away more than 20,000 eligible undergraduate applicants a year because there is not enough funds to accommodate admitting more students.

To combat the increasing number of potential students without access to CSUs, Chancellor White plans to further his talks with elected officials in Sacramento, targeting the importance of enrollment needs.

White also plans to battle courses  in high demand, or bottleneck courses, experienced by students today through the use of technology. “I’m quite encouraged by the creativity of our faculty, our staff, who participated in creating ideas and are now testing those ideas to try to use technology in a different way going forward,” White said.

The chancellor added that technology would not be utilized to replace faculty but to further the learning experience of students.

One way the CSU system will use technology to avoid future bottleneck courses is through online enrollment. White believes students who enroll online can transition from high school to college easier and avoid “stubbing their toe for the wrong reasons.”

When asked about the initiative to make CSU campuses smoke-free, White admitted that the transition would be a difficult one, largely because a number of smokers would feel unwanted on campus.

Rather than having individuals smoke and come back on campus, White said his goals were aimed to educate students in hopes of breaking a habit originating from a biological source.

“Smoking is no longer an individual sport. The exhale is harmful to others and that’s the basis by which we can say a person’s personal right to make choices is overridden by a health concern.

A lot of America is moving towards smoke free environments and we should be one of them.”

In order to increase security on campus, White stressed the importance of training officers to be more effective on campus and to communicate better between the CSUs. He admitted that law enforcement differs immensely from rural to urban areas, but that he would like to see more cooperation and understanding between campus and city police.

“We’ve played a role to oversee that there is adequate police presence on campuses but the nuances of the community become more of a responsibility on that community,” White said.

During the BOT meeting Tuesday, the board discussed allocating funds to fix large maintenance issues that have been continuously deferred due to a lack of funding.

Infrastructure critical needs throughout the 23 CSU campuses now total more than $500 million. Officials worry that if maintenance problems persist they will be forced to close buildings down, resulting in more students being turned away due to a lack of space.

“If we continue to allow buildings to go unattended, we will have to close buildings,” said BOT member William Hauck. “(This) will affect the amount of students we can enroll and the number of students in a certain class.”

The overall amount of funds requested for the 2014-2015 budget was $250 million, with only $15 million allotted for infrastructure needs.

Gov. Jerry Brown, who attended the BOT meeting last week, expressed his concern in setting aside money to admit more students into CSUs when infrastructure maintenance needed to be taken care of.

Brown used a hotel as an example. He said that the owner of a hotel would not invite 20,000 visitors to their hotel with leaking roofs and broken elevators.

“Anybody who has a business, house, (or a) farm has to take care of their needs before taking on the new,” Brown said. “If the place isn’t safe, please fix it before you do anything else.”

Gov. Brown said that fixing all infrastructure and maintenance issues is a necessity and that the CSU’s will have to adapt if they are not awarded the full $250 million requested in their budget.