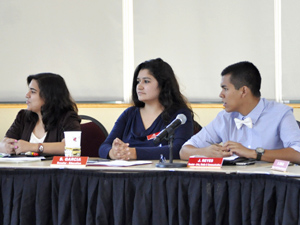 Associated Students (A.S.) learned that the CSUN community can now purchase tickets to events on campus through Ticketmaster.

A.S. General Manager David Crandall announced on Monday that CSUN President Dianne Harrison approved the proposal and that Ticketmaster is now up and running with CSUN events for sale on its website.

“We have worked with Ticketmaster for decades and just now recently that partnership has started back up,” Crandall said.

When visiting the Ticketmaster website a lot of information is given about each event so that visitors can be well prepared beforehand. Resources on the webpage include weather conditions in the area, parking fees and locations, directions to the campus as well as nearby restaurants and eateries just in case event-goers may want to grab a bite prior to attending.

Ticketmaster is a useful way for CSUN visitors to purchase tickets conveniently without having to visit the campus. However, tickets for upcoming events and shows will still be sold on campus at the A.S. Ticket Office, which is located in the University Student Union (USU) as well as the Plaza Del Sol.

The opening of the Valley Performing Arts Center (VPAC) along with CSUN athletics rekindled the connection between CSUN and Ticketmaster after 10 years of disassociation. According to Crandall, CSUN athletics has developed a new way to make its events appealing and accessible to potential game attendees with the help of Ticketmaster.

The Plaza del Sol at the USU is also now selling tickets immediately before performances, which will stop students from reselling their tickets to those need, according to Crandall.

In other news, A.S. announced its first Member of the Month. The award was given to A.S. Senator Sarah Garcia, deaf studies major and anthropology minor.

According to the A.S. website, the member of the month is said to “go above and beyond job duties to enhance the reputation of A.S., has done something particularly notable in their department, and (is) knowledgeable of A.S. departments and resources.”

A.S. Chair of Personnel Lisa-Mone LaMontage presented Garcia with a bouquet of roses to go along with her award.

“She volunteers whenever she can, despite her busy schedule with work and school,” LaMontage said before handing Garcia her award.