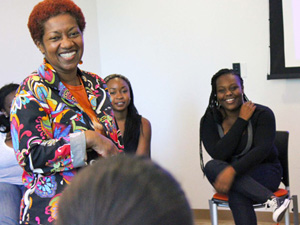 Young African-American female students, a population that does not traditionally seek counseling, will now have the opportunity to safely and comfortably obtain those services with the formation of the Sistahood Community.

Paulette Theresa, of the University Counseling Services, saw the need among young African-American women, but also because of the stigma attached to seeking mental health services. She believed that meeting the students outside of the counseling center would be the answer.

“It’s a group of students and staff and faculty. I’m bringing the students together as a place for them to feel safe and to feel comfortable once a week as a drop-in center,” Theresa said. “The reason we don’t have the support meet here at the University Counseling Services is so students can feel more comfortable.”

Debra Hammond, executive director of the University Student Union, offered to cosponsor and collaborate with Theresa in an effort to provide a space for black female students to feel safe and connect with others like them.

Theresa explains that an individual can connect with another that looks like them as it  will make them feel more comfortable and willing to open up. It is because of this that roughly 30 mentors form the base of the community, of which half are highly active and attend the weekly meetings. These mentors are women faculty across campus who will serve as both a connection and support to the young women.

“I’ve been here for a year and a half at CSUN and I felt so disconnected,” said Whitney Hudson, senior communications studies major. “I didn’t participate in anything or I kind of felt out of place at a lot of events and coming here and actually speaking with the girls, African-American girls, and knowing they have the same concerns that I have is great.”

In an effort to raise the student’s involvement on campus, the members created four committees. They aim to organize events designed to raise their own empowerment and spreading the word of their new community. The events also serve to connect other members who may not be able to attend the weekly meetings so that they can still participate.

The four committees include the Black Cultural Pride Committee, Campus-Wide Events, Film and Media Discussion Nights and the Personal Empowerment and Self-Care committee.

“I think that there are different, various committees for different areas that we believe that the students can benefit from and grow and feel like they belong,” said Ani Avetisyan, Special Assistant to the Executive Director of the University Student Union.

The community operates on two different levels for students. It works as a drop-in center in which students can attend when they need to and stay as long as needed. It is also an entity, in that the name itself connects people together, helping to build a community.

“I think that anybody who wants to feel connected on campus, Black, White, Hispanic, Asian, anything, you should find a club that you want to go to whether that’s here or any part of campus,” said Brittney Bridges, junior public health promotion major. “There is a club for everybody and if there isn’t one, start one.”

Although the Sistahood Community is a very young group, its goals include staying consistent so the young women can always have a place to come to, spreading the word and increasing their total number of members from the current group of 40 and focusing on the development of the girls in terms of education and self-improvement.

“I really do what I do because I feel like I’m called to do this in my life and when someone is impacted that way, there’s no higher calling than the opportunity to be able to share in someone’s journey with them,” Theresa said. “That they would allow me to do that, it’s an honor so I don’t take that lightly.”