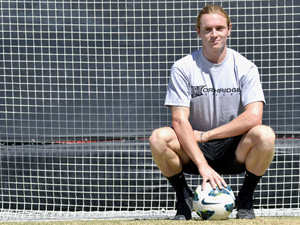 Cal State Northridge senior midfielder Chris Smith knows a thing or two about sports injuries. With about 10 different injuries in his soccer career, Smith knows even more about what it takes to get back in the game.

From broken bones to multiple ankle sprains, Smith, 22, has overcome each injury with no sign of diminished determination.

In July 2012, Smith was playing for a little league team in Hawthorne during the summer where he suffered his most recent injury. As he went for a goal, Smith pivoted his body to kick the ball. His ankle twisted and he landed on it – the bone couldn’t take the pressure and resulted in a fracture.

48 hours later, he finally decided to consult a doctor who decided they had to break the bone for it to heal correctly.

Smith was forced to stay off his feet for a minimum of seven weeks. With only a month and a half until the next season at CSUN, Smith’s injury couldn’t have come at a worst time. Recovering from the broken ankle was a challenge, but the hardest part for Smith was staying off the field when all he wanted to do was play.

“It was no fun,” Smith said. “But in some way it was good for me to sit and watch my team playing. It motivated me to heal quicker, work harder, and get back on the field.”

Smith went through an intensive conditioning program once he was able to put pressure on his ankle. Throughout the injury he had practiced ankle mobility and jump exercises  while working on his stability. Off the field, he spent hours working on handling skills and going to the gym. But now Smith faced the biggest challenge.

“After weeks of being off my feet, my muscles had gotten weak,” Smith said. “Once I got back, I really had to adjust to the speed of the game. Getting back in shape was the easy part.”

Men’s soccer coach Terry Davila said Smith’s recovery was a result of his own hard work and that he always thinks of the team first.

“Chris has made a lot of personal sacrifice,” Davila said. “He’s a strong individual and has the ability to do what he wants under pressure. He always finds a way to compete even in the hardest circumstances.”

Smith said that he owes a lot to his team, including his coaches.

“They keep me humble,” Smith said. “My coaches give me what I need, not always what I want. They get under my skin enough to motivate me, but not frustrate me. They’re a hardworking team.”

Smith has always been athletic. From the get-go his first choice was soccer but his parents put him in basketball, football and even karate to start. One day he finally decided to take matters into his own hands and tried out for the soccer team in high school.

“I love how (soccer) is continuous,” Smith said. “You’re always moving. And it’s in a team environment.”

According to Smith, he now knows the sport very well. His acquired ability to read the game and realize what it needs when it needs it, is a strength he has developed.

But even a great player like Smith can admit his best friend Brian Behrad, CSUN senior forward, out does him in speed.

“I wish I were as fast as Brian,” Smith said, laughing. “I’m sure he’ll love hearing that.”

He recalls having to work on his eye-foot coordination and the rigorous training it took to gain his way into the sport.

And it’s clearly paid off. The CSUN men’s soccer team has fought their way to the top and were ranked No. 3 in the National Soccer Coaches Association of America (NSCAA) poll before losing to UCLA on Sept. 22. They are currently ranked No. 6 in the same poll.

But that isn’t enough for the team. According to Smith, they’re gunning for the NCAA playoffs.

“It feels good, but we’re far from satisfied,” Smith said. “There’s still work to be done. We want to be number one throughout the season. Nobody plays to finish in third place.”

Smith is majoring in mechanical engineering. Why did he take such an unrelated major? He said it’s fun to take a challenge and he’s always been good at math. Doing something so different keeps him on track, Smith said.

He’s worked at Camp Pendleton, a naval base camp in San Diego, and has even coached soccer there. Last year, he coached at Harvard-Westlake high school.

Even though playing professional soccer is his obvious first choice, Smith is keeping his options open. He plans some day on having a pair of cleats on his feet and a few patents under his sleeve.