Driver’s licenses for all means safety for all 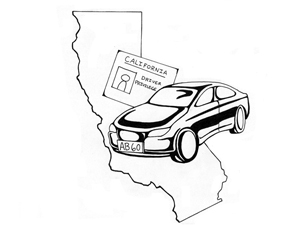 Gov. Jerry Brown recently said he would sign a bill that would allow undocumented immigrants in California to obtain driver’s licenses and although it is beneficial, it also comes with some concerns.

The bill, AB 60, was approved by votes of 28-8 in the California Senate and 55-19 in the Assembly, with Republicans joining the Democrats in the majority vote.

These new licenses will clearly classify the cardholder as being undocumented and will not be acceptable as legal identification. They will carry the initials DP (driver’s privilege) instead of DL (driver’s license).

In order to apply for these licenses, applicants must provide a signed affidavit that he or she is not eligible for a Social Security number and lacks proof of authorization to reside in the U.S., proof of California residency and still requires proof of identity using a consular ID, foreign passport, foreign birth certificate, marriage or divorce certificate, school transcript or a foreign voter registration card.

These new licenses are not being given away. The applicants will still have to take the same written and driving test that a citizen in California would have to complete.

Another criticism concerns taxpayer dollars in funding the new driver’s licenses. Many believe that in these times of scarce resources and budget cuts, California taxpayers should not have to fund education, health care and other services to undocumented immigrants.

These immigrants are not here enjoying a free ride while citizens pay for all of the public services they receive. They hold jobs and pay taxes, making them just as deserving as anyone else.

Another argument against AB 60 concerns whether or not these newly licensed drivers will or will not purchase insurance. Although it is not guaranteed that all drivers will have insurance, the chance to obtain it will now be available to all.

It is illegal to operate a vehicle without auto insurance and some of the repercussions include a suspended driver’s license or vehicle registration, traffic ticket or hefty fines. Many of these newly licensed drivers will surely want to keep their new privilege and so would consider purchasing insurance.

One of the major pushes for this bill was the idea that these licensed drivers would now be able to commute safely. Although many see it as unhelpful because Social Security cards are required to be employed, not driver’s licenses.

“This bill will enable millions of people to get to work safely and legally,” Brown said in a recent LA Times article. “Hopefully it will send a message to Washington that immigration reform is long past due.

These new drivers will be able to drive to their jobs where their employer might have hired them illegally. And although it sounds as if undocumented immigrants are taking advantage of the system by having a driver’s license and taking a job that would be given to a citizen, the undocumented immigrant is the one who is still at a disadvantage. A 2012 report by The Migration Policy Institute found that there was a 67 percent earnings gap between naturalized citizens and non-citizen immigrants.

The Pew Hispanic Center estimates the number of undocumented immigrants in the workforce at eight million out of an overall population of approximately 11.2 million individuals, or 71.4 percent. These workers are willing to accept lower wages and poor working conditions because of their residency status.

The fact that AB 60 has passed can be taken as a sign that immigration reform could be well underway and this may be one of the first steps.

As of now, the government is offering as many as 1.76 million undocumented immigrants a way to avoid deportation for now through the Deferred Action for Childhood Arrivals program (DACA).

Obama announced the DACA program in June that postponed deportation for any individuals that were brought to the country as children. They must have arrived before they turned 16, be younger than 31, be high school graduates, be in school or served in the military, along with having a clean criminal record.

Apart from this process there is also the naturalization process. It is here that immigrants will have access to all the rights and benefits as any U.S.-born citizen.

Nearly two-thirds of the 5.4 million immigrants legally here from Mexico who are eligible to become U.S. citizens haven’t done so because of the difficult process, according to a the Pew Hispanic Center study. These applicants must learn English, take a citizenship exam and pay the $680 application fee.

Although citizenship should not be given away, it should however still be attainable by the average individual who needs it.

These new driver’s licenses seem to be one of the first steps in giving them opportunities to better their lives. This step will lead to countless others as immigration reform continues to loom.