Teachers and students have mixed feelings about myCSUNtablet initiative 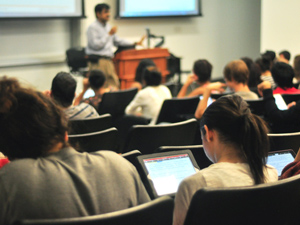 To begin the fall semester, seven academic programs were given the opportunity to combine education and technology, potentially leading to one cohesive force of learning.

However, after a month of implementation, the myCSUNtablet initiative has garnered mixed reviews among teachers and students.

“I’d rather just take notes on paper and just have a typical lecture than sit there and do activities on the iPad,” said Mei-Ling Cabrera, junior cell and molecular biology major. “I guess it’s kind of a learning thing but I don’t learn like that.”

Cabrera is among those types of students who prefer a more traditional form of learning, consisting of taking notes on paper while listening to a professor’s lecture.

Ibtissam Haddada, 24, senior student, said she initially struggled with learning how to use the applications on the iPad, but supports the initiative moving forward.

After having taught at CSUN for 15 years, Beth Phillips, who teaches classes for the physical therapy doctorate program, feels using the iPad as a teaching tool has been quite an adjustment.

“It’s teaching an old dog a new trick for sure,” Phillips said. “I was happy with a scalpel in the anatomy lab and chalk in the chalkboard. But I’m convinced now that I’m halfway through with this that it is going to be really helpful once I’m done with it.”

Phillips said she has experienced technological snafus when students are trying to access an application all at once, but that the problem was not a major hinderance to the learning environment.

Brandon Johnson, a student in one of Phillips’ classes, has benefitted from the myCSUN tablet initiative.

“It has actually helped me out in preparation for quizzes and examinations and, deeper than that, helped me actually understand what’s happening in the human body rather than just recording what is on a test,” Johnson said.

Some professors are not only using iPads to teach course content, but also to administer exams and quizzes.

Cindy Malone, professor of biology, said that students may be experiencing added stress from the new software they’re using to take tests.

“There was no amazing revelation of wow, everybody did much better, but that could be just it was a lot of stress taking the exam on the iPad,” Malone said. “The new software and the inability to take notes on stuff and just a whole new thing may have masked any kind of increased learning that we may have seen. The increased anxiety decreased the ability to find the right answers.”

Phillips believes that once the kinks work themselves out this semester, using iPads will become a better experience for students and professors alike.

“I think once everyone gets used to using it and understands how to quickly download things, what apps work best for themselves, its going to be very efficient,” Phillips said. “There’ll be much less use of paper and much less strain on your muscles carrying around heavy textbooks.”

As part of the initiative, students are required to either already possess an iPad or buy one through Apple or the CSUN bookstore. Students can opt to pay for the device in two- or three-semester installments using their financial aid.

Phillips said she tries to accommodate students who either cannot afford an iPad or have a different type of tablet.

“I don’t want somebody to have finances be the reason they can’t participate [in class],” Phillips said. “They won’t have as many bells and whistles and widgets and things they can interact with, but they will have all the basic content in a PDF format if they can’t buy the iPad.”

The long-term impact of the myCSUNtablet initiative remains to be seen, but some students are already looking forward to the possibilities.

“I think the future is bright,” Johnson said. “I think that it’s all about storing information in one localized area that allows students and professors ease of access to necessary and pertinent information to help us absorb the information that we need to learn.”