The Dark Side of the World Cup 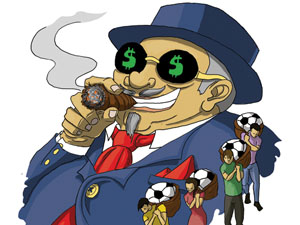 The World Cup is a big deal around the world. Actually, it is a huge deal. Not only do fans get to watch the best of what soccer can offer in the course of several weeks but the countries hosting the tournament almost empty their piggy banks to run the event. Let us just look at some numbers to get a feeling of the sheer size of the World Cup.

Last time it took place was in 2010 in South Africa. About 3.18 million fans attended the 64 matches. It was shown in every single country on Earth and television coverage reached over 3.2 billion people. The finale between Spain and the Netherlands alone reached 909.6 million in-house viewers and 130,000 jobs were created in South Africa because of the event. South Africa spent $5.6 billion to host the games and $3.6 billion was raised, not even counting money made by selling actual tickets to the soccer games.

It is apparent that The World Cup extends far beyond soccer alone. It is no longer a matter of love for the game but rather a matter of prestige, politics and economics. Being chosen as a host country will put you on the map – for better or worse.

Whilst the festivities in South Africa are three years gone, another country has been passed the torch and steps into the limelight as they prepare to host the World Cup in 2014. Brazil was unsurprisingly chosen as host nation in 2007 by FIFA due to the fact that they were the only bidders. Still, when the news broke, Brazilians took their celebrations to the street and excitement began bubbling in the hearts of soccer fans. The World Cup would return to the home of legends like Pelé, Ronaldo and Ronaldinho.

However, the paint of those newly built soccer stadiums slowly started trickling off as report after report about demonstrations and slave-like conditions started surfacing. At first, everything had gone so well. Stories told of how Brazil battled slave labor and gave former “slaves” dignified jobs front and center in the World Cup preparations. Fast forward one year and an investigation recently showed that 111 workers were lured to work on the expansion of Sao Paulo international airport with promises of high wages but instead got living conditions “analogue to slaves,” as stated by the Labour attorney general’s office.

In retrospective, it is worth to ponder if Brazil actually would have been chosen as the host nation had there been other contenders. The country’s economy was already damaged in 2007 because of the credit crisis and on top of that, the population consisting of 193.9 million people was and still is marked by social disparity. During this summer, thousands took to the streets to protest corruption, working conditions and the billions of dollars spent on the World Cup and 2016 Olympics.

While Brazil certainly is to blame for taking two such huge events as The World Cup and the Olympics upon them in times of economic and social distress, it is FIFA who not only soccer fans but also the general public should cast a critical gaze at. Soccer’s governing body is first of all the one who mainly milks the profit of every major event. During the World Cup in 2010, FIFA earned more than $3 billion through sale of television rights and sponsorships, while South Africa, having spent more than twice that amount, only made around $100 million from ticket sales.

Faced with the choice of finding the host nation for the World Cup in 2022, FIFA eyed the possibility for an even wider audience and bigger profit in the Arab world when Qatar made a bid. Chosen in front of nations such as Australia, Japan and the United States, there was a serious backlash as critics claimed that the voting was “fixed” and oil-rich Qatar had bought the support.

FIFA defended their choice at first but FIFA president, Sepp Blatter, has since stated that “it may well be that we made a mistake at the time.” This comment was solely made on the fact that the temperatures during summer reach an inhumane level. But what about inhumane treatment of workers then? The Guardian reported that immigrant workers in Qatar face “abuses that amount to modern-day slavery.” In an upsetting revelation, it was found that at least 44 workers died between June and August due to either heart-related issues or workplace accidents, and further that Nepalese men had not been paid for months.

Having run face first into a brick wall of human rights, FIFA is currently trying to salvage what is left of their credibility by promising to make workers’ well being their first priority. What these recent events have shown more than anything is that FIFA not only governs soccer but also hold the lives of millions of people in their hands. Now, the question remains whether this is a job they took too lightly.