Tacos are no longer just a Tuesday meal 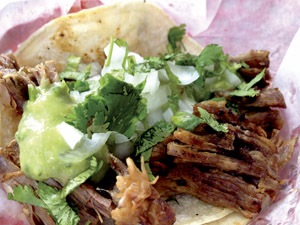 For a city steeped in an immensely diverse and rich Hispanic heritage, it is incomprehensible how few quality Mexican restaurants operate in the San Fernando Valley, commonly referred to as “The Valley.” San Fernando is recognized as “The First City of the Valley,” and has been a final destination for emerging Hispanic families since its foundation in 1874. According to a regional map produced by the Los Angeles Times, Latinos remain the predominant ethnic group the 34 communities that comprise the SFV.

However, in a community of predominantly Hispanic ethnicities, it often feels as though it would take the resurrection of Francisco Pizarro to track down something as straightforward as a good street taco. In a quest to uncover a street taco that stayed true to it’s humble origins, three purveyors of Mexican cuisine answered the call, but only one proved worthy.

Señor Sol, located at 9233 Reseda Blvd., failed to positively represent two varieties of taco: the street taco and the rolled taco, or “taquito.” Their street tacos ($2.80 ea.) only consist of a corn tortilla and choice of meat – in this case, carnitas (pork) – and patrons are expected to doctor their tacos with available salsa bar accoutrements. Despite the salsa bar’s well-balanced offering, nothing could have saved the over-priced, foot-long chicken flauta ($4.75) from drowning beneath a sea of luke-warm cheese, lettuce, sour cream and flavorless guacamole.

Three blocks southwest of CSUN and Señor Sol stands the cosmetically unabashed El Taco Llama. The 8709 Corbin Ave. establishment is one of two in the SFV under the same name and ownership, and it speaks to the no-frills taco enthusiast.

Aside from the aesthetic handicap of a dilapidated kitchen, puzzling menu and cash-only sales, El Taco Llama’s 3-taco combo at $7 plus change is one of many affordable – albeit uninspired – lunch options. Just make sure to prevent an untimely demise of the complimentary tortilla chips and rice from the proximal threat of liquid-state refried beans.

Sensing that El Taco Llama wasn’t enough to quell the escalation of a curiously arousing taco bloodlust, Tacos Michoacán is only a few miles down the road, at 17020 Devonshire St. At $1.25 each, health-conscious diners will be hard-pressed to resist expending a cheat day at the cost of a few good tacos and a high-fructose corn syrup-free Mexican Coca-Cola. The cabeza (head), buche (stomach) and lengua (tongue) act as mouth-watering proxies of taste, momentarily transporting taco aficionados south of the border. The combination of chopped cilantro and onions, accompanied by a generous splash of fresh salsa, elevates the simplicity of Michoacán’s tacos.

Although Tacos Michoacán emerged as the considerable favorite, there are dozens of Mexican restaurants waiting to be discovered in the SFV. Unfortunately, the reality is that in such an oversaturated market, dining out may entail eating at more Señor Sols and El Taco Llamas before a Tacos Michoacán comes along.