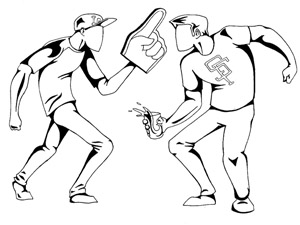 When Walter O’Malley, then owner of the Brooklyn Dodgers, decided to move the ball club to California in 1957 he convinced the then owner of the New York Giants, Horace Stoneham, to move his ball club there, too. O’Malley wanted to keep the years-old rivalry alive. Both teams moved west where the Dodgers settled in Los Angeles and the Giants settled in San Francisco. And just like Walter O’Malley wanted, this historic rivalry remained alive and kicking.

Just last week, a San Francisco Giants fan fatally stabbed a Dodgers fan blocks away from AT&T Park after a fight over the long-running feud ensued. The fan, Jonathan Denver, was in town to catch a Wednesday night ballgame with his father and brother for his father’s birthday.

Unfortunately, the string of senseless violence connected to this rivalry does not end there.

The Dodgers-Giants rivalry is just one of the catalysts that have sparked this kind of meaningless bloodshed. It spans across all sports and all countries.

In a 2011 pre-season game, the San Francisco 49ers beat the Oakland Raiders at Candlestick Park 17-3 before two fans were shot and wounded in the stadium parking lot. And just before that a 26-year-old fan was attacked and brutally beaten unconscious in a stadium bathroom which led to him being hospitalized.  The “Battle of the Bay” exhibition game no longer is played as a result of this incident.

Sometimes a rivalry isn’t needed to trigger these senseless acts. Sometimes the sting of a recent loss can have the same effect.

Two Chicago Bulls fans were shot by two Philadelphia 76ers fans while riding a train in Philadelphia after the Bulls beat the Sixers 96-89. Both parties had been arguing before the shots were fired. But want to know the worst part? The shooters were teenagers! What kind of example are we setting if two teenaged boys are causing this kind of violence?

At a soccer game in Brazil, a referee named Otavio da Silva got into an on-field argument with player Josenir Abreu and da Silva eventually ejected him from the field. But Abreu wouldn’t leave so the referee took out a knife and stabbed him to death. In retaliation, angry fans stormed the field, stoned the referee to death and quartered his body before mounting his head on a stake in the middle of the field.

So what causes this kind of behavior? Is it the frustration of another loss or the excitement of another win? Or could that inebriant called alcohol, which often rears its ugly head when something needs to be blamed, be the culprit?

As much as I enjoy drinking a beer at Dodger Stadium I would gladly give it up if there was any chance that it could decrease the number of fan-related deaths and injuries.

These kinds of incidents ruin the sanctity of sports. No fan should ever be killed over a lost game. In all seriousness, what control do the fans have over the outcome of the game? And besides bragging rights and contentment, what does the fan get when their team wins a game or even a championship title? Unless they have money on the game, absolutely nothing. They are mere spectators.

On the other hand, when a fan commits these kinds of violent acts they become eligible to receive lawsuits, time in prison, community service, fines and my favorite: a place in hell.

When I attend Dodger games I am choosing to use my valuable leisure time to enjoy something that brings me happiness. It’s a time for me to escape the struggles of my daily life and be a part of something that’s bigger than myself.  I carry a love and respect for the game of baseball. I also carry love and respect for the rest of humanity, especially the people who love the same sport as I do. Sports should bring fans together not tear them apart.