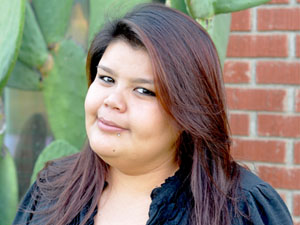 Choosing to continue her undergraduate studies at CSUN while her father was dying in a Colorado hospital bed was a hard but clear choice for Blanca Samano. Although her father never got  the chance to tell her the pride he felt in how attending college could change her future, Samano later found out through his friends.

“One of the reasons that made me come back to college (after visiting him in the hospital) was that a lot of his friends approached me and told me that my dad talks so much about me,” Samano said. “He was proud that his oldest daughter was going to college. My parents, they have the perspective that I’m doing something great for them.”

Samano’s father went into a coma in spring 2011. After years of heavy drinking and poor nutrition, he developed liver disease and diabetes. Samano visited her father in mid-March and returned to CSUN hoping to catch up in her studies during spring break. Even though doctors didn’t expect him to survive, Samano retained a discreet hope against medical probability.

“My whole world fell apart then and there because my dad was part of my support system. When I needed financial support, emotional support, when I needed anything, my dad was my person. When he passed away it was really shocking to me,” Samano said.

Her father died during spring break that year. She was not able to attend his funeral during finals week and despite her best academic efforts, Samano had to medically withdraw from all her spring classes.

Missing her father’s funeral and not being involved in rearing her younger siblings are a few examples of paradoxical guilt felt by many first generation students, Samano explained.

Samano thanks the broadcasters from Univision for reporting a story on the importance of a college education. She said she couldn’t imagine what she would be doing if her mother had not watched that broadcast and pushed her to attend CSUN.

“When you are first generation, your parent’s knowledge about college is all what they see on TV, what the media tells them it is,” Samano said.

Samano is a peer advisor in the Mike Curb College EOP Satellite. She works alongside full-time staff that advise first generation EOP students.

“A student who is first generation may need additional information on how and what kind of access they can receive. I also believe that university personnel advocates for students who are first generation versus parents advocating for the students,” said Sevetlana Pirjan, an EOP academic advisor.

Despite the fierce support her mother provided in the beginning of her college career, Samano received frequent calls from her asking if she’d had enough of college and if she was ready to come home.

“At times my parents don’t understand what it means to be away. They don’t understand that you can’t come to all the holidays and the birthday parties, especially when they live four hours away,” Samano said.

Samano’s family didn’t expect her to go to college, saying that they have more hard-laboring farm workers, than students.

Her background influenced her chosen majors, chicano/a studies and sociology, and her plans to return to thermal as a community organizer.

“I think it goes back to being from a farm working family. I know what happens in the fields. There are a lot of things that we can strive for and work for,” Samano said. “Working conditions are bad, the living conditions in Thermal are really bad.”

Her involvement in M.E.Ch.A. (Movimiento Estudiantil Chicano de Aztlan), a Chicano student organization, began during Samano’s freshman year and led to her position as chair.

“My first impression of her was of a strong woman who was not afraid to voice her opinion,” said Ana Miriam Barragan, Samano’s roommate and M.E.Ch.A. member. “She might be impatient at times, but when it comes to organizing and her life, Blanca will not waste time focusing on the problems but rather focusing on alternatives.”

Through academia, Samano wants to realize her parent’s hopes of creating something of greatness for them through her future plans.

“In the future, I do see myself as a professor. I do see myself as one of the mujeres that I look up to here in the Chicano studies department. But I also feel a sense of commitment to my community back in the Coachella Valley—back in Thermal,” Samano said.