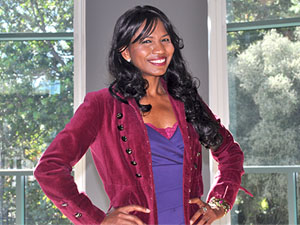 CSUN Alumna Olympia LePoint is not your typical educator.  A former award-winning rocket scientist, LePoint is the CEO of her own consulting corporation and is the author of the book, “Mathaphobia: How You Can Overcome Your Math Fears and Become a Rocket Scientist.” And now she can add TED speaker to her resume.

The TEDxPCC Conference, an independently organized TED event, will be held at the Arcadia High School Performing Arts Center in Arcadia on Saturday, November 23.

TED, an acronym for Technology, Entertainment and Design, is a set of conferences that are featured around the world.  Established in 1984 by a non-profit foundation, TED promotes “Ideas worth spreading,” and features speakers who promote creative, innovative ideas.

LePoint will be the featured speaker at the independently organized TEDxPCC Conference in November, where she will discuss the challenges she faced in overcoming barriers in both her education and career and how others can use the same methods to succeed.

LePoint’s path to success was not easy.  She faced adversity early on, growing up in poverty in Los Angeles and struggling in the classroom.  LePoint failed algebra and geometry, and got a D in calculus.  However, in 11th grade, she met a teacher who tutored her for the AP Calculus exam.

LePoint realized that she struggled with “mathaphobia,” a term she created which describes the fear that shuts down a person’s critical thinking when struggling with mathematics.

“When I learned to overcome mathaphobia I was empowered and I thought to myself if  I could do this and reprogram my brain to become a rocket scientist, I can help other people do the same,” LePoint said.

After graduating high school, LePoint was motivated to pursue a career in science and mathematics. She was shocked to discover that only 1 in 31,000 African-American women get a doctorate degree in mathematics or science.

“I became determined to be on that path to be one of those individuals, as well as change those numbers and help not only other African American women but men, women, and children alike of all colors understand science and mathematics and embrace it so we’ll have a new future of people to pursue those fields,” she said.

“Even as an undergraduate, she was passionate as a student in completing her education and sharing the value of education with everyone around her,” Hadvina said.  “She has always been an innovative problem solver and she has honed her skills well and is now dedicated to fostering change in our nation.”

LePoint, who graduated in 1998 with a BA and later in 2005 with an MA, both in Applied Mathematics, said her time at CSUN was “extremely amazing and extremely challenging at the same time.” She even had to tough it through the 1994 Northridge earthquake.

“We had to find a way to keep up the courage to continue with our education,” LePoint said, “at the same time it was exciting because all of us that were here that stayed bonded together and we’ve become friends for life.”

She was hired by Boeing after she graduated and worked as a rocket scientist with NASA for 10 years as a reliability engineer.

LePoint helped launched 28 space shuttles, and was awarded with the 2004 Boeing Company Professional Excellence Award, as well as the 2003 National Black Engineer of the Year “Modern Day Technology Leader” Award.

The TEDxPCC Conference will focus on “overcomers,” what LePoint calls people who overcome adversity. The event organizer selected her as a speaker after reading an article about how she became a rocket scientist after failing mathematics in the past.

“I’m always talking about the process to succeed, but they’re asking about what it was like in my head as I overcame these barriers,” LePoint said. “This is the first time I will share with the world what it took and what went through my brain in doing so.”