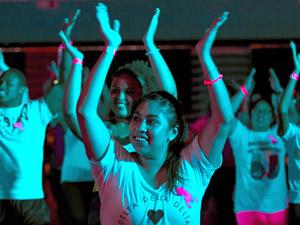 Nearly 300 CSUN students, staff and community filled the Matadome to capacity and busted a move for the 3rd annual Zumbathon in an effort to raise money for Breast Cancer research Wednesday evening.

Hosted by Unified We Serve, a student volunteer program at CSUN, this zumba marathon was dedicated to the memory of Mary Jane Smith-Waldman, a former CSUN Kinesiology instructor and CSUN Hall of Fame Volleyball player. Smith-Waldman passed away 2 years ago after battling breast cancer.

“It was very important that we honor somebody who had first-hand experience with our cause,” said Justin Weiss, activity coordinator for Unified We Serve.

Matador Athletics was a major sponsor of this particular Zumbathon in memory of Smith-Waldman because she was a student athlete while attending CSUN.

“We identified through Matador Athletics that Mary Jane was really somebody who helped shine light on the importance of doing an event like this to help individuals like her,” Weiss said.

Zumbathon at CSUN has become an annual event that allows the Matador community to dance for the end of disease.

Among the 300 plus attendees were representatives from Tau Gamma Rho, a fraternity on campus that volunteer and raise money for the Susan G. Kolman For the Cure foundation as part of their philanthropic focus.

Tau Gamma Rho participated in the festivities and danced their way in the direction of a cure for breast cancer.

Mason Brown, CSUN senior, 4th year Greek and programmer on the fraternities’ executive board was in attendance with 15 of his brothers.

“We have moms, aunts and sisters going through it so we thought the cause fitting,” Brown said.

According to Brown, Tau Gamma Rho chose breast cancer as their philanthropic cause because it hit home.

Supporting their Greek brothers were the sisters of Alpha Xi Delta.

Senior and 4th year Greek Vanessa Lozoya attended her first Zumbathon. “I was really excited to hear about it” Lozoya said. “My grandma is a breast cancer survivor so I wanted to come out and donate to the cause while having a blast.”

Student Recreation Center (SRC) Zumba instructors, Danny Ramos and Elaine Woods led the crowd in the routines and were joined by other CSUN staff and dancers.

“I’m a Zumba instructor in my personal life” Ellerbe, a regular at Zumba, said. When she found out about the event from the instructors she was excited to participate and work with Unified We Serve.

Having CSUN staff participate in hands on roles is a new addition by event coordinators in an effort to get more of the campus involved in helping raise money for the cure.

The event was publicized on campus as well as through social media and was open to students, faculty, and the public.

Tickets were sold for $10 by Associated Students and $13.50 via Ticketmaster. All proceeds from Zumbathon are being donated in Mary Jane Smith-Waldman’s name to the Susan G. Koman for the Cure foundation.