Matt Damon visits CSUN to introduce NYU professor Diane Ravitch, a representative of the Education on the Edge speakers series 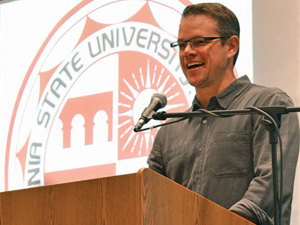 Diane Ravitch, research professor of education at New York University, spoke for the first inaugural Education on the Edge speaker series in Northridge Center of the USU Wednesday, and discussed her views on the problems within American education and what should be done to fix them.

Matt Damon, Academy Award-winning actor known for such films as “Good Will Hunting” and the “Bourne” movies, introduced Ravitch, who is acquainted with Damon’s mother.

“I’m very honored to have the opportunity to introduce Diane tonight,” Damon said. “She’s somebody that I have admired for a very long time. She’s an amazing person. She’s America’s foremost historian in the areas of education policy, she’s a champion of public education, she’s a courageous speaker and she’s a truth-teller.”

Michael Spagna, dean of CSUN’s college of education (COE), felt Damon’s appearance was important because actors, artists and athletes have gained cultural relevance, which could make an impact on others by publicly supporting an educator.

“I think if we can transfer some of that cultural appreciation that we have for actors like Matt Damon to teachers, we’ve done a great thing because they’re, right now, not appreciated that much.”

After approaching the podium, Ravitch promoted her new book “The Reign of Error” and throughout her speech, a common theme was “hoaxes” related to education.

She said former President George W. Bush’s No Child Left Behind Act of 2001 was a hoax because Senator Lamar Alexander, her former boss at the U.S. Department of Education, told her he didn’t believe that 100 percent of children would be proficient in math and English by 2014 – an ambition of the act – but it was important to have goals.

“That means the people who passed (the act) didn’t believe it was possible, and for the last 10 years we’ve been firing teachers… and closing schools based on an impossible goal…that’s a hoax,” Ravitch said.

Ravitch criticized the Race to the Top program, an incentive that provides grants to states that implement certain education reforms.

Ravitch said she didn’t know where “the top” was and why educators were racing there.

“(It’s) the highest they’ve ever been in history…We are making progress, and we’ve got to recognize it,” she said.

Ravitch emphasized the problem of poverty, calling it a “barrier to greater progress” and lamented that others have said it was an excuse for bad teachers.

Nina Rees, president and chief executive officer of the National Alliance for Public Charter schools, was a former colleague of Ravitch and disagrees with Ravitch’s views on poverty.

“That mindset very much contradicts the viewpoint of a lot of reformers who believe that regardless of how poor you are you should have access to a high quality education,” said Rees. “(We also believe) it is the educators job to bring that quality education…and you certainly should not be making excuses for kids who come from a disadvantaged home. If anything you need to invest even more time and energy because education ultimately is (their) ticket out of poverty.”

Ravitch mapped out several solutions to the problems she feels America is facing with education, including good prenatal care for women to facilitate normal cognition in their children, universal pre-kindergarten, arts programs in schools and reduced class sizes.

Spagna feels Ravitch’s visit is an example of CSUN’s commitment to education.

“(Ravitch) recognizes that we are a big producer of quality teachers, and so she wants to speak at institutions where a lot of people are going into a profession and wants to inspire them,” COE Dean Spagna said.