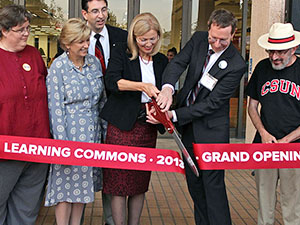 Thursday afternoon marked the official opening of the Library Learning Commons that was made available to students this semester.

“I’ve been asked many times what is the Learning Commons?” Mark Stover, dean of the Oviatt Library said. “Well it’s a place for students to study, learn and explore. And they can drink coffee now.”

The library’s first floor was completely renovated with new, ergonomic furniture to replace the older furniture. The walls have also been painted over in a white and red. The old lobby was transformed into a coffeehouse environment, with various new tables and a new Freudian Sip.

The grand opening also celebrated new Learning Resource Center (LRC) on the third floor and the new Information Technology (IT) Center on the first floor computer labs. The IT Center, where students can get tech help and rent electronic equipment, has been placed at the first floor computer labs. According to Stover, the library now comes with more outlets for electronics to meet student demands for more electric outlets.

Stover introduced and thanked the LRC, the Freudian Sip and the IT Center for partnering with the Oviatt Library.. Stover hopes for future collaborations for the benefit of all parties at the library.

President Dianne Harrison spoke next, to thank the library staff for their hard work and to congratulate the library for the grand opening of the Learning Commons.

Dr. William Watkins, Vice President of Student Affairs, was the last to speak, noting the significant changes from when Watkins saw the first opening the Oviatt Library.

“The new library (compared to the old) is like day and night,” Watkins said. “The former openings were pretty much opening a traditional library. But now there’s electricity plugs, a space that is steeped in technology. It creates a social context that’s a very different kind of experience.”

Marianne Afifi, associate dean of the Oviatt Library, thanked everyone for their hard work in making the Learning Commons a success.

“I feel very proud because we accomplished something big in a short time with great teamwork,” Afifi said. “People were selflessly giving their free time to make this happen.”.

“I’ll tell you what I think is going to be interesting,” Harrison said. “I think when we start getting towards midterms, and students who haven’t come yet  start coming and will go, ‘whoa, where have I been?’ And then near finals, people are going to start marking their favorite spots.”

According to Stover, funding for the new library came from various sources, one of them being the campus quality fee.

“Some of the money that funded the project came out of the campus quality fee, which is a percentage that the students do pay,” Luis Canton, a senior studying political science and the A.S. Chief of Staff said. “So I do hope that students do utilize the library.”