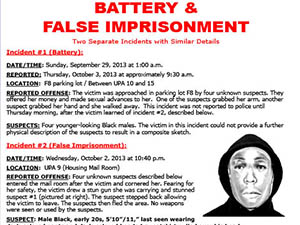 The first incident occurred Sept. 29 at 1:00 a.m. in the F8 parking lot between student housing University Park Apartments 10 and 15.

The four suspects allegedly approached a female student in the parking lot and offered her money, as well as made sexual advances towards her. One of the suspects reportedly grabbed the victim’s arm and another suspect grabbed her hand.

Capt. Scott Vanscoy of Patrol Operations describes the scene as a simple battery. “No injuries resulted from the sexual advance, she walked away unharmed,” Vanscoy said.

The altercation was reported to CSUN PD a couple days later after the victim reportedly learned of the similar incident that occurred on Oct. 2.

On Oct. 2 at 10:40 p.m. near the UPA apartment 9 mailrooms, four unknown suspects cornered a female student, and stopped her from leaving.

According to CSUN PD’s report, the victim became frightened, pulled out a stun gun and stunned one of the suspects. After defending herself the suspects fled the scene, and according to PD no weapons were reported found on the suspects.

The four suspects were described to PD as having a dark complexion, though not enough information was given to result in a composite sketch.

“The quicker an incident is reported the better, we want to catch who is responsible for this,” said CSUN PD Public Information Officer Christina S. Villalobos.

In California it is legal to carry and use an over the counter stun gun without a license as long as it’s used for self-defense.

The primary suspect is described as being in his early 20’s, about 5’10, darker complexion.

He was last reported wearing a dark hooded sweater pulled over his head and dark colored pants.The three other suspects were described to have similar physical characteristics and clothing.

CSUN’s Police department is providing a composite sketch of the primary aggressor.

Vanscoy said, “Detectives are still actively looking into both incidents, and we do not have a lead yet but are investigating items that will hopefully help with the investigation.”

Vanscoy reports that there were no witnesses in either incident.

Villalobos said, “ If anyone sees anything suspicious call as soon as possible or knows of any other incidents come forward to help solve this investigation.”

If you have any information on any of the two incidents please contact Detective Sgt. Mark Benavidez at (818) 677-3901.