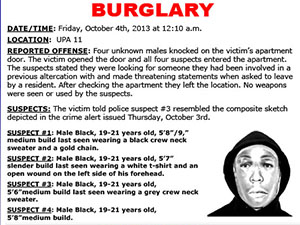 CSUN police department (PD) is investigating a burglary that occurred in University Park Apartment (UPA) 11 today between 12:10 a.m. and 12:20 a.m.

Four unknown male suspects entered UPA 11 and knocked on a residents door, according to PD’s crime report. When the female resident opened the door, the suspects forced their way into the apartment, looking for someone they claimed to have had a previous altercation with, according to police.

After the resident asked them to leave, the men refused and made threatening statements.

“There was no property taken and luckily there were no injuries,” said CSUN PD Public Information Officer Christina Villalobos.

Police said this incident resembles two prior incidents that occurred on Sept. 29 and Oct. 2, involving a group of four male suspects.

In the Sept. 29 incident, the suspects approached a female, offered her money and made sexual advances towards her.

On Oct. 2, the four male suspects cornered a female student in the mailroom attached to UPA 9.

“It does have a similar description, we don’t know for sure (if they’re related) but because the suspect description (matches the prior incidents) it may be related,”  Villalobos said.

Although no property was taken, PD said this crime is still a burglary.

“You don’t have to take property for it to be classified as a burglary,” said Villalobos. “A burglary is entering a building with the intent to either take property, commit petty theft, grand theft, or another felony and because the person made threats-that’s the felony, so it met the elements for a burglary.”