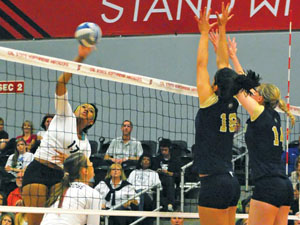 Although the Titans were swept, they played a competitive match, as the Matadors only ran away with the second set, 25-12.

The first set saw the Matadors and Titans trade points until Fullerton took a late lead, 21-17.  CSUN rallied, eventually pulling ahead as Gedryn and junior opposite hitter Natalie Allen recorded kills on five of the last eight Matador points to win the set.

The Titans played CSUN close in the third set, as a late 20-16 Matador lead eroded.  CSUN was able to squeeze out a win after consecutive kills by Haina and Stinson bailed the Matadors out of a 24-24 tie.

Despite besting Fullerton players in all individual statistics except kills, the Matadors had their lowest hitting percentage in a set since their loss to top-ranked Washington back on Sept. 20, hitting .106 in the third set.

Matador players committed nine errors in the deciding set, the most errors they have committed in a set all season.  However, head coach Jeff Stork still believes his team performed well Saturday.

“We played a good Fullerton team so we’re excited to come out with a 3-0 win,” said Stork in an interview with gomatadors.com. “Obviously we’re doing some good things both offensively and defensively.”

Junior opposite hitter Natalie Allen continued to be a solid contributor for the Matadors, as the former Big West Player of the Week scored seven kills, 13 digs and four assists.  Junior libero Kelcie Randazzo also recorded a match-high 14 digs.

Stork knows that despite the Matadors’ record and their Big West opponents’ struggles, CSUN cannot lose their focus.

“… We need to continue to work hard on the process of becoming a great team,” Stork said in the same postgame interview with gomatadors.com

The Matadors have continued to receive votes in the NCAA Top 25 rankings, and victories against Long Beach State and UC Irvine should improve their ranking as they continue to enjoy one of their best starts to a season in school history.