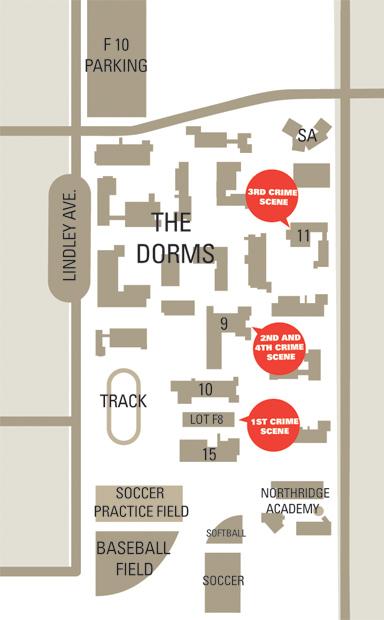 A series of crimes that have taken place in the student housing University Park Apartments (UPA) within a span of two weeks have Residential Life Services and the CSUN Police Department (PD) taking extra precautions to keep residents safe.

Just two days ago, between 8 a.m. and 9 a.m. on Saturday, an unknown male suspect broke into an apartment in UPA building 9. The female resident awoke to the suspect “standing above her touching her bare leg,” according to the PD crime alert. How the suspect managed to enter the apartment is still unknown. The suspect fled the scene with the victim’s wallet and several documents in tow.

Residential Life Services have distributed the PD crime alerts in emails to every resident in student housing advising them to take safety precautions and to inform PD of any information they may have regarding the incident.

Friday evening campus police went door to door within every UPA building to distribute crime alerts and safety-tip literature. They also had residents save the CSUN PD dispatch number in their phones.

“Our officers are out trying to get information from students to see if there is any information they can provide that (will) lead to an arrest,” said Christina Villalobos, CSUN PD Public Information Officer. “That’s how information is obtained. We don’t always wait for information to come to us, sometimes we go out into the community and try to find information.”

Among the four crimes that occurred in the dorms was a burglary on Friday in UPA 11 between 12:10 a.m. and 12:20 a.m.  According to PD’s crime report, four unknown male suspects knocked on a residents door and when she opened the door the suspects forced their way into her apartment. The suspects claimed to be looking for someone they’d had a previous altercation with, according to police.

After the resident asked them to leave, the men refused and made threatening statements. They left after checking her apartment for the individual they were searching for.

“There was no property taken and luckily there were no injuries,” Villalobos said.

Police said this incident resembles two prior incidents that occurred on Sept. 29 and Oct. 2, involving a group of four male suspects.

In the Sept. 29 incident, the suspects approached a female, offered her money and made sexual advances towards her. On Oct. 2nd, four male suspects cornered a female student in the student housing mailrooms in UPA 9.

“It does have a similar description, we don’t know for sure (if they’re related) but because the suspect description (matches the prior incidents) it may be related,”  Villalobos said.

Although no property was taken, PD still considers this crime a burglary.

“You don’t have to take property for it to be classified as a burglary,” said Villalobos. “A burglary is entering a building with the intent to either take property, commit petty theft, grand theft, or another felony and because the person made threats, that’s the felony, so it met the elements for a burglary.”

Resident Advisor’ s (RA) are being informed of these crimes and updated daily regarding any recent developments.

“As of now, RA’s when on duty are doing extra rounds. We do in-door and exterior rounds (where) we go outside to the buildings we are supposed to and look (around),” said Aby Escatel, 21, third floor UPA 17 RA and graduate school counseling program major. “I just recently heard that some RA’s are staying in the lobbies more, they are being outside of their lobby area making sure that people who are passing by look familiar.

Escatel said residents are very shaken up about the series of crimes that took place in the dorms.

“A lot of residents are asking me if they should purchase pepper spray (and) some already have pepper spray,” said Escatel. “My residents are using the buddy system. They are aware and they are sticking together to protect themselves. They are (even) asking if it is safe to go outside.”

RA’s are advising residents not to let anyone enter the buildings that do not have a key card.

CSUN PD is still investigating whether the incident that took place Saturday morning is related to the previous three.

“It takes time to investigate so our detectives are working on it and trying to determine whether or not they are connected,” said Christina Villalobos, PD public information officer.

Residential Live Services and PD will be working together to implement new security precautions necessary to keep residents safe this week. In the meantime, PD advises students to use the buddy system at night and to call them immediately if something happens or if they have any information regarding the past crimes.

“Part of the problem is that these individuals are reporting the crimes far after they have taken place,” said Villalobos. “By the time they (the victims) are reporting it hours later, suspects are gone and it makes it more difficult for police. The most important thing is to report them (incidents) immediately. That is why the officers provided information on how to reach dispatch.”