Tickets sell out and Afrojack wows at Big Show 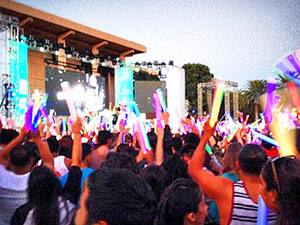 Out of a $200,000 budget set aside by Associated Students (A.S.) for Big Show, Afrojack was paid $75,000 to perform.  Security for the show cost approximately $35,000 and included CSUN Police services, parking enforcement, Allied Barton security services and additional law enforcement. The true cost of the show will not be known until later.

Due to a contract drawn up to meet Afrojack’s specifications, A.S. prohibited attendees from recording and/or broadcasting his performance. According to the contract attendees were not permitted to “record, broadcast, televise, film, photograph, webcast, or otherwise reproduce the visual and/or audio performances.” The terms of this contract included all media and press, making this Big Show the first ever that The Daily Sundial was prohibited to photograph and record.

DJ Afrojack performed his brand of electro house music as the crowd held up glow sticks throughout the night, which led Afrojack to comment that it was the biggest glow stick party he’d ever seen.  Afrojack played fan favorites as well as new music from his upcoming album during a set that lasted more than an hour.

“I loved the glow sticks, the art wall and the light tunnel,” said Shirin Nahvi, an 18-year-old CTVA major. Nahvi and a friend were shoved to the front of the crowd earlier in the night, but enjoyed being up close to the stage.

“It was a loud show and a fun night, so I’m definitely coming back,” Nahvi said.

A few students were caught jumping the fence to enter the show and escorted out, while some where caught smoking marijuana and also escorted out. There were no violent incidents reported.

According to a staffer at the first aid tent, there were some concert goers who passed out, most suffering from dehydration while a few others were under the influence of drugs or alcohol. Most were able to recover with rest and water from the water bar, but a few people were transported to a hospital by ambulances which were on standby on campus for the event.

“There were a couple of ifs, ands, or buts, but the night was nice. It was good, and it was a high-energy event,” said Frank, a security guard at the event.  Frank, who had worked at past Big Show events, felt the smaller crowd contributed to the safer atmosphere.

Shermanology experienced some technical difficulties as their music was stopped abruptly several times.  However, they sang to the crowd when the music stopped, much to the appreciation of the audience.

Destiny English, a 20-year-old recreation and tourism management major, noted that there was a lot of open space and plenty of rest areas around the Sierra Quad.

“The event was safe. The music was great, and there were a lot of different things to do,” English said.

A few concertgoers were disappointed with the length of Afrojack’s set, as he finished at 9:15 p.m. He and the other performers were headed to Hollywood for another show later that night.  Some concertgoers compared the event to Matador Nights, which lasted until 1 a.m.

“Tonight was fun, but I hoped the show would last longer,” said Saeed Alqarni, a 25-year-old graduate engineering student.

Although many spectators left the dance floor after Afrojack finished, they lingered on the Sierra Quad, where they met up with friends and watched a dance performance that followed Afrojack.

Associated Students (A.S.) planned Big Show and decided to go with the EDM theme after getting a taste of the Diplo experience at last year’s Big Show.

“Electronic dance music is growing rapidly through our culture, with music festivals attended all around, [so] we wanted to try it out,” said Eric Planas, A.S. liaison. “We’re changing the whole concept of Big Show and it’s going to be a lot different.”

Leanne Vincent, director for student leadership at A.S., was impressed with the amount of work done by the students who work in Associated Students and produced the show.

“Production has done a really remarkable job working on such a big project this time,” Vincent said.  “I’m so impressed with the amount of work they’ve done. They’ve really run the show.”