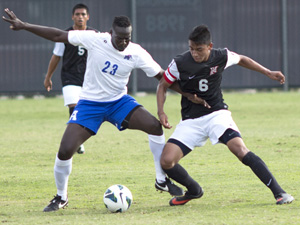 With the win, CSUN earned its third consecutive shutout and has become the 3rd team in modern Big West play (since 2001) to have 10 wins through 11 matches.

Despite its record, UC Davis proved to be a formidable opponent.

Right from kick off the Aggies pressed the Matadors, creating turnovers and forcing CSUN into a defensive shell.

UC Davis had two shots in the first two minutes of play, but both went wide of the goal.

Northridge finally registered its first shot of the half in the 10th minute, off the foot of senior midfielder Chris Smith.

In the 20th minute, Rivas got tangled with an Aggie player and was booked for a yellow card.

With constant pressure applied by the Aggies, the Matadors were able to mount a counter attack and break the stalemate in the 32nd minute.

A well placed cross by senior forward Beto Velasquez found the head of Behrad near post and gave CSUN an early 1-0 lead. The goal was Behrad’s sixth of the year and Velasquez picked up his sixth assist on the play.

UC Davis tested Hobbs late in the 43rd minute, but the Northridge goalkeeper kept his cool and came away with the save.

Going into the halftime, CSUN was out shot 3-10 and allowed UC Davis to attempt seven corner kicks.

It was more of the same from the Aggies in the second half, as they created more opportunities and registered the half’s first four shots.

Northridge had an excellent chance to extend their lead to two in the 67th minute.

Junior midfielder Yarden Azulay found himself all alone with Aggie goalkeeper Omar Zeenni inside the box, but Zeenni was able to dive out and make the save.

The Aggies fed off their goalkeeper, and continued to press the ball in the late stages of the half, leading to four more corner kicks.

Rivas sealed the game for the Matadors in the 82nd minute thanks to a mistake by the UC Davis defense.

Freshman midfielder Steven Manios stole the ball 18 yards out, and flicked it to a wide open Rivas, who buried the one-timer past Zeenni for his third goal of the year.

UC Davis had a shot to cut the deficit to one in the 89th minute, but Hobbs rose to the challenge and denied the attempt.

The Aggies finished the game outshooting the Matadors 19-9 and attempting 10 more corner kicks (12-2).

Hobbs made history with the win, moving into tenth place for single-season wins at Northridge with 10.

CSUN will look to extend its win streak to four this weekend, as they host UC Santa Barbara on Friday at 7 p.m. and Cal Poly on Sunday at 6:30 p.m.