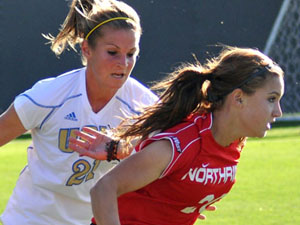 The game was the first time these two teams faced-off against each other since last year’s Big West Tournament Championship game. For the third-straight time, CSUN and Fullerton played into overtime.

Sophomore forward Kendall Moskal scored in the 36th minute when was able to play the ball and make a turn freeing her up for the shot to give the Matadors a 1-0 lead.

The goal was her first of the season coming off a throw-in by junior defender Leandra Walker. Walker now leads the team in assists with four.

Fullerton’s Morgan Batcheller scored on a corner kick in the 72nd minute which would eventually send the game into overtime.

Sophomore goalkeeper Cynthia Tafoya was under heavy fire, and despite saving seven shots in the second half, she was not able to ensure the shutout.

CSUN and Fullerton played an even match. Fullerton out shot CSUN 16-14, but both teams recorded 10 shots on goal. The edge went to Fullerton who had 11 shots in the second half.

The Matadors back on their heels for much of the second half getting outshot 11-4.

Head coach Keith West has attributed his team needing to learn how to play with intensity for the full 90 minutes.

The Matadors have a favorable schedule remaining with four of their six games at home. They play Cal Poly Thursday night and UC Santa Barbara Sunday evening.