Not monogamous, but ‘monogamish’ 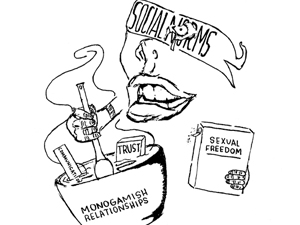 Some people say that they would become overwhelmed with jealousy if their significant other were to flirt or check out another person. We often hear people argue that if one truly loves someone, then one shouldn’t destroy the sanctity of the relationship by sleeping with other people.

Monogamish was a term coined by writer turned-advice columnist Dan Savage in order to refer to his relationship dynamic with partner Terry Miller. In a nutshell, monogamish refers to a mostly monogamous relationship in which two partners engage in the social and romantic conventions of monogamy with some leeway for involvement with other potential sexual encounters (either with both people or individually), but only with the knowing consent of both people in the relationship.

In order to debunk the opinion that monogamish relationships are unnatural, we believe that one should put monogamy under the microscope as well. Pundits of a conservative persuasion will argue that it is relationships like monogamish ones that will destroy the institution of marriage.

Well, statistics never lie. According to a 2012 study by the American Psychological Association, 40 to 50 percent of all marriages end in divorce, with subsequent marriages having a higher percentage of divorce rates. Could it be that infidelity and lack of communication in a monogamous relationship play a big factor in the divorce rate in America? We think so.

We argue that perhaps it’s the couple who maintains a monogamish relationship, not the strictly monogamous one, who has the greater amount of respect, commitment and love for one another. In order for this type of relationship to succeed, a great amount of importance should be placed in communicating to one’s partner exactly what it is that one wants and needs out of a relationship. That takes an amazing repertoire of communication skills between both parties, especially when opening up about one’s sexual desires. Having enough patience to engage one’s partner in a conversation that would otherwise be considered as a confession about infidelity or their deepest, darkest sexual secrets and being willing to come to a sensible compromise about how to go about fulfilling these needs speaks highly of the respect and love that someone holds for their partner. Most people would simply not want to hear it and either break up or ask for a divorce. Just last year, both of us witnessed the end of a 25-year marriage due to the fact that one person in the relationship had kept hiding 20-years worth of affairs under the covers. Both parties could not agree on a monogamish or open relationship, and that tore away at the fabric of their marriage.

One may ask how being in a monogamish relationship is different from being in an open relationship. As we see it, the thing about open relationships is that, most of the time, there is less emphasis on communication between partners regarding their sexual encounters. Often times, people who engage in an open relationship will release information about their sexual exploits to their partners on a need-to-know basis. In contrast, people in monogamish relationships, would ideally develop a system in which communication is exercised more frequently. For example, a monogamish couple about to go to a party will talk about set boundaries while flirting around with the idea that there may be a possibility that some erotic encounter may happen.

It’s a myth to assume that people in monogamish relationships will sleep with just about anyone without any regard for the third party’s feelings. There’s always the  assumption that because one is in a monogamish relationship, one doesn’t care about the person they are inviting into their bed — they’re just not romantically interested in that third person. They may be cared for as a friend or, at the very least, as a human being. An understanding has to be reached between all consenting adults involved and, of course, boundaries must always be respected.

Another of the many myths associated with the concept of monogamish relationships is that the main reason for having them in the first place is out of sexual dissatisfaction, unapologetic promiscuity and maybe even out of boredom. The fact of the matter is that people are wired for innovation. Yes, we did just say monogamish relationships are in fact an innovation. Let’s put it this way: it must’ve taken at least a little bit of unconventional thinking because human beings

have always found a way to reinvent pleasure in their lives, so why should innovations of sexual desire and practices not count as one of those reinventions? If two consenting adults can have safe sex outside of marriage without anybody getting hurt, what makes it so vile and weird? Nothing.

Why does society look down on other people who engage in consensual, agreed-upon sexual relations outside of their relationship? Easy: we have been conditioned to believe that marriage and a monogamous relationship with that one perfect soulmate, owning a three-bedroom house with a white picket fence and 2.5 children is the end-all, be-all prized social status of love, respect and commitment in an all-American relationship.

We are in no way putting down monogamous relationships — if it works for you, it works for you; but we all have to admit that spending the entirety of the rest of your life having sex with just one person is not an easy thing to do, especially for couples who have been together for a very long time. Wouldn’t some freedom to make out with that really hot person from class or to at the very least flirt with the handsome teller from the bank without having to worry about any backlash from your partner be awesome? To have that level of trust with one’s significant other, like we said, starts with being completely honest with each other, but most importantly, with oneself.

As cliché as it sounds, it still holds that love is not sex and sex is not love, but neither are a substitute for the respect one needs to have in order to enjoy a healthy relationship.