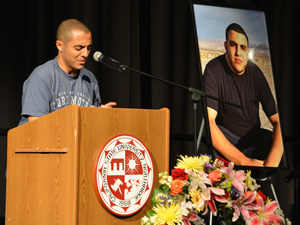 Ahmad Michael Jabali, who died of cardiac arrest in the Student Recreation Center (SRC) Sept. 30, was celebrated by family and friends at a memorial ceremony hosted by the Lebanese Student Association (LSA) Monday night.

Jabali, a 23-year-old graduating senior was running on the SRC’s indoor track when he collapsed. Alongside Jabali was a friend who got help as soon as he collapsed. Firefighters arrived within minutes.

The Northridge Center was dimmed with many candles around the stage with two large photos of Jabali. At the entrance, there was a podium with a sign-in book and it was asked by those who came to write down a memory of their friend.

The room was filled with his family sitting front-row as well as members of the Lebanese Student Association, with which he was greatly involved with, and brothers from Pi Kappa Phi, to which he was pledging.

The night began with Islamic prayer. The first to speak was Nicole Karran, president of the Lebanese Student Association, who opened with, “A son, a brother, a friend, and now an angel.”

Karran continued on by discussing the kind man Jabali was and how involved he was with the Lebanese Student Association, which was founded last year. Right from the start, Jabali was involved and invited to be a part of the board.

Even with training and preparation, having a student collapse inside the SRC last Monday could not have been predicted.

According to Carmen Chandler, director of media relations, as soon as someone in the SRC sees that something is wrong or someone is in danger, staff must be contacted to determine if the situation is a code blue.

“If they (the staff) think a code blue should be enforced, the SRC building manager will assess the situation. Everybody in the SRC is CPR certified by the American Red Cross, but lifeguards are professionally CPR trained and called next,” Chandler said.

If the code blue is enforced, police are contacted and they in turn call the ambulance.  “The ambulance (should) arrive in minutes like it did in this case,” Chandler said.

“Michael’s life was taken away from us too soon…Michael is alive in every single one of us,” LSA treasurer Arman Zabunian said, speaking of his dear friend.