E-cigarettes may not be the safer option for smokers 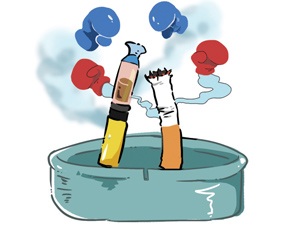 Electronic cigarettes may not be safer than their rolled tobacco counterparts, according to a new study.

Traces of formaldehyde, acrolein and acetaldehyde – all known cancer-causing agents – were present in 30 percent of studied vaporizers, according to the study.

“The amount is too trivial to be concerned about,” said Elaine Keller, spokeswoman for the Consumer Advocates for Smoke-free Alternatives Association (CASAA). “The same amount of carcinogens are found in nicotine gums, and as far as I know, no one has developed cancer from chewing them.”

Keller then cited a 2013 study which found that toxicants in e-cigarettes are 9-450 times lower than those found in real cigarettes.

“Our findings are consistent with the idea that substituting tobacco cigarettes with e-cigarettes may substantially reduce exposure to selected tobacco-specific toxicants,” the study concluded.

In Fall 2012, CSUN President Dianne Harrison asked the university to take a survey to share its thoughts on smoking on campus. Afterwards, a university-wide committee would be appointed and charged with reviewing all the input and recommending a solution. This process is still ongoing.

Currently, CSUN allows outdoor smoking on campus except in designated smoke-free zones and/or within 25 feet of any building entrance.

Some members of the CSUN community believe that even though vaporizers potentially could be safer alternatives to actual cigarettes, they’re not necessarily better for people.

“If you consider that it removes toxins, they’re healthier in that way. But the e-cigarettes help them justify putting nicotine in their bodies. Psychologically, they’re not healthier because the person is still using something external to cope with their feelings or situation,” said Claudia Menjivar, a psychology major.

Others believe it’s a marketing scam aimed at getting people hooked on nicotine.

“Really what they’re aiming for is to get rid of a lot of the nuisance cigarettes create,” said Sergio Carvajal, an urban planning major. “It’s a marketing scheme. They’re trying to make it more consumer-friendly.”

While the French study found some e-cigarettes contain those three specific carcinogens, cigarette smoke contains 32, and is responsible for more than 440,000 deaths per year, according to the U.S. Department of Health and Human Services.

E-cigarettes, which are inhalants that look like rolled cigarettes used to vaporize liquids containing nicotine to mimic smoking, were created by a Chinese inventor in 2003 and are being marketed as safe alternatives to tobacco as they contain no smoke.

Though studies have shown vaporizers can help smokers reduce nicotine cravings, there is no conclusive scientific studies which show they are safer. However, Keller believes they save lives.

“There are people who have been trying to quit for years and have tried every product on the market, but have been unable to do so” she said. “Switching to e-cigarettes has allowed them to quit.”

A study published in 2012 recommended that the Food and Drug Administration (FDA) should pursue the regulation of e-cigarettes until manufacturers can provide evidence to support their claims of better safety. The report also found that e-cigarettes have the same short term physiological effects as real ones, and stated that further tests are needed to determine their long term effects.

In September, 41 attorneys general banded together and asked the FDA for e-cigarette regulations, citing the rising amount of teenagers using them who believe they are safe.

However, in August the FDA released a statement saying they met with e-cigarette manufacturers and still have not decided whether to regulate the product or not.

“The FDA did not raise or weigh in on potential regulatory options – including any potential restrictions on e-cigarettes or any other particular product category – during these listening sessions,” said Mitch Zeller, director of the FDA’s Center for Tobacco Products, in a statement released to the media.

Currently, only individual states have passed legislation regulating e-cigarettes, and they can be legally sold to minors in 40 states. Last year, the CDC released a report which found that the number of middle and high school students who use e-cigarettes doubled from 4.7 percent to 10 percent since 2011.

Though California has a ban on selling e-cigarettes to minors, former Gov. Arnold Schwarzenegger vetoed a bill in 2010 which would have effectively banned their sale to the general public, his reason being that if adults are allowed to buy tobacco products, they should also be able to purchase e-cigarettes.

California currently allows the use of e-cigarettes anywhere, even indoors, but a bill attempting to classify them tobacco products is in the works, meaning users would have to abide by California’s smoking laws if passed.

Some communities in California are taking matters into their own hands by either already classifying e-cigarettes as tobacco products or by regulating their sales.

The city of Seal Beach, located in Orange County, is very close to becoming one of the first cities to place restrictions on e-cigarettes. Its City Council is considering an ordinance which would ban smoke shops from selling the smoking devices for 45 days, and possibly for up to a year.

California State University, Fullerton completely banned smoking – including the use of e-cigarettes – from its campus this year and became the first CSU to do so.