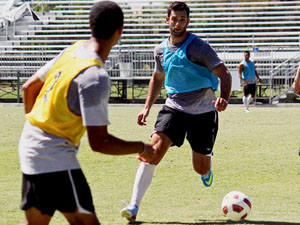 The No. 6 Matadors have started the season off on the  right foot. After seven consecutive wins, the Matadors were off to their best start since the 1979 season. Even the first loss of the season (10-0-1) against  UCLA on Sept. 22 did not seem to affect them.

The team remains unbeaten in the Big West Conference (2-0-0) and with the victory against UC Davis last Sunday (2-0), the Matadors earned their third consecutive shutout and have become the third team in modern Big West play (since 2001) to have 10 wins through 11 matches.

One of the players responsible for the positive results is forward Sagi Lev-Ari, who has scored eight goals and given three assists so far this season.

Lev-Ari, 24, grew up in Haifa, Israel, and has been playing soccer at a high level since he was 12 years old, when he was part of Maccabi Haifa Football Club’s youth squad.

Back in his home country, Lev-Ari served as an infantry soldier in the Israeli Defense Force. In Israel, male citizens are obligated to serve for at least three years after graduating high school and female citizens have to serve for two.

In 2011, he played one season for Monroe College in New Rochelle, NY. As a starting forward, Lev-Ari helped his side to a second-place finish.

His journey at CSUN began last year, when associated head coach Yossi Raz recruited him to become part of the Matadors’ soccer team.

“He told me to come here because they were a good team. I trusted him and didn’t regret it,” Lev-Ari said.

The junior business major explains that one of the obstacles he faced when he first arrived in the United States was adapting to the different soccer style.

“In Israel, it’s all about tactics. In the USA, it’s much more powerful and rapid,” he said.

With the help of CSUN’s technical committee, Lev-Ari learned how to adapt to the new style.

“Sagi is a great, mature kid,” said head coach Terry Davila. “The guy is so hungry to score goals, and that’s something you can’t teach.”

Center back Pol Schönhöfer Bartra met Lev-Ari last July, when Raz set them up sharing the same apartment. It was the beginning of a strong friendship since both were freshmen at CSUN and came from another country (Bartra was born in Barcelona, Spain).

“I learned a lot from this kid and I hope he learned a little from me,” Bartra said. “On the field we all know he is the main target and that he has the quality to put it inside the net so we all try to find him as much as we can.”

Lev-Ari also emphasizes the importance of teamwork in soccer. “We are like brothers in the team, and everyone helps each other on and off the field,” Lev-Ari said. “If I need help with homework or something, I can ask any of my friends. The same happens in the game. If I need to score goals they are there to assist me.”

Lev-Ari prepares for every match by having a balanced diet and a good night of sleep.

“When I’m in the field, the only thing I think about is to give my best to win the game,” he said.

One of Lev-Ari’s major influences in soccer is Real Madrid’s forward Cristiano Ronaldo.

“He is a complete athlete. He is strong, he is fast, and he has everything for being one of the best athletes in the world,” he said.

In the near future, Lev-Ari hopes to achieve his business finance degree at CSUN and play professionally in Major League Soccer next year.

“I really want this guy to play in the next level because he works hard and he really deserves it,” Bartra said.