Your trash may be someone else’s dinner 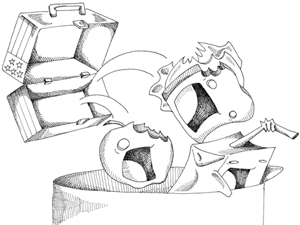 If you’re one of the 50 million Americans struggling with hunger every day, you needn’t look further than your neighbor’s trash.

In 2011, the United States tossed approximately 36 million tons (or 72,000,000 pounds!) of edible food into waste bins, according to The Environmental Protection Agency (EPA). That’s roughly 230 pounds of food waste annually per capita.

To put this number into perspective, imagine a family of four going to the grocery store once a month and discarding an entire cart filled with a week’s worth of goods.

So who’s to blame for America’s wasteful consumption habit?

A staggering amount of edible food in America hitches a ride on the landfill express, and the primary culprit seems to be the misleading dates on packaged and perishable food items. Buyers often misinterpret the “sell by” or “best by” dates on labels as a spoilage warning, mistakenly throwing out conditionally good food.

Dana Gunders, of the National Resources Defense Council (NRDC), submitted an issue paper in August 2012 titled “Wasted: How America is Losing Up to 40 Percent of Its Food from Farm to Fork to Landfill,” which included remarks about the nation’s deplorable food practices.

Gunders estimated that if the U.S. reduced its food waste production by just 15 percent, the recouped food could effectively feed 25 million Americans– half the nation’s hunger-stricken contingency. The author also reported that of the 28 percentage of losses within the distribution and retail bracket, expired sell by dates attributed to an average discard value of $2,300 per store.

Although improper labeling is troublesome, the largest impact of unnecessary food disposal is the accumulation of greenhouse gases. If global food wastage were a country, it would be the third largest producer of methane emissions behind China and the US, said a United Nations Food and Agriculture Organization (FAO) report.

The 60-page summary report, titled “The Food Wastage Footprint,” was released in September, and meticulously accounts for every aspect of food waste and the impact it has on the world economy, environment and health.

The reason methane has become synonymous to the umbrella term “greenhouse gases,” are due to the fact that methane emissions are largely results from human activities. Methane comprises 9-10 percent of America’s greenhouse gas emissions, and impacts climate changes nearly 20 times greater than naturally-forming carbon dioxide emissions.

Although the United States, indeed the world, appears to be in dire straights, the proper installation of public policy and joint venture research can see food waste dwindle in the next generation.

Last year, Sweden made headlines as the country without trash. Public Radio International (PRI) broke a story about how the small, Scandinavian country of just 9.5 million people– roughly the entire population of Michigan– had resorted to importing trash from neighboring Norway.

‘The problem is, Sweden’s recycling program is just too successful,’ said the PRI review.

The squeaky-clean European nation dispenses only 4 percent of household waste into landfills, and recyclable materials are incinerated and converted into district heating for over 250,000 residents.

Stateside, a group of engineers from the Colorado School of Mines, led by Ivan Cornejo, has developed a way to turn trash into glass. Using composted food high in mineral content, such as egg shells and banana peels, dried compost is heated in a 3,000-degree kiln and shaped into glass sheets.

Glass is a multi-million dollar industry, and one that produces more than 8 million tons of carbon dioxide emissions annually worldwide. Cornejo and company’s small-scale science project was propositioned as response to combat issues surrounding the destructive practices of open-pit mining.

­CSUN president Dianne Harrison also emphasized the need for increased trash awareness during the Freshman Convocation earlier this semester. Edward Humes’ book, “Garbology,” was the centerpiece of Harrison’s speech concerning unnecessary waste, and the responsibility of students to be more environmentally conscious being the largest incoming class in university history.

The NRDC, among other environmental and health agencies, provide helpful tips on how to limit food wastage, and how hurting the environment also hurts our wallets.

Experts remind shoppers to only purchase what you can feasibly consume in a few days time, and advocate the use of freezers to store ready-made meals for the future. Get creative with your recipes by “mining your fridge” to make meals with leftover ingredients, and educate yourself on how to decipher whether food is expired, or just past its sell by date.