CSUN alumna nominated for People Magazine’s Teacher of the Year 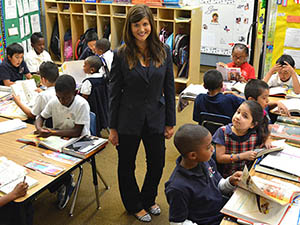 Wisdom Academy for Young Scientists teacher Kaylie Gomez’s classroom is not large by any means. In fact, Gomez’s classroom is one of several makeshift teaching spaces set up in a converted chapel in this Salvation Army building at the heart of South Central Los Angeles.

And it’s not exactly soundproof, either. The voices of other teachers and their students can be heard as they interact throughout the morning’s activities.

But Gomez makes the most out of her space, which her school rents. Every corner of her classroom has some sort of educational reference, whether it’s a map of the United States, photographs of elected officials, multiplication tables, or an outline of the scientific method.

A 2011 Cal State Northridge graduate, Gomez holds a multiple-teaching credential and a bachelor’s degree in elementary education. She is currently pursuing her master’s degree.

As a teacher, Gomez will choose not to solely focus on one or two core subjects like mathematics or language arts. Instead, she opts to teach other subjects as well. Gomez’s week involves teaching her students everything from keyboards on Thursdays, to Zumba on Fridays, as well as art, and social studies.

Her students have even published a book together. “Wacky Stories From Wisdom Academy for Young Scientists” was published in spring 2013 and can be bought — all proceeds benefit the school — online at Amazon and Barnes & Noble. Each chapter features a student describing one exaggerated thing about his or herself (featuring, among other chapters, “Elizabeth spells with numbers” and “Miss Gomez can speak eye language”).

“She motivates them. My son is now more eager to learn,” said Wisdom Academy parent Yomeisha Moore, whose son, Nathaniel Frazier, 8, is a student in Gomez’s class. Moore praises Gomez for being dedicated to her students and solely focused on their success.

Over this summer, Gomez was nominated for the inaugural People Magazine Teacher of the Year Award for her efforts.

In July, People invited readers to nominate their favorite teachers by casting online ballots. Based on those ballots, People magazine editors narrowed the finalists to six. The public then cast online votes for who they believe should win the Teacher of the Year award. Voting ended Sept. 6, and the final winner will be announced Oct. 18.

“She is definitely deserving of the award,” said Wisdom Academy Principal Karen Horowitz.

Other nominees for the Teacher of the Year Award include instructors from Arkansas, Washington, Bakersfield, and Tucson. Gomez’s fellow CSUN alumna, Genein Letford, a teacher at Wisdom Academy for Young Scientists in Canoga Park, has also been nominated.

A native of Madrid with Mexican and German blood, Gomez felt her call to become a teacher at a young age. Her earliest experiences in the classroom stem from visits to her mother’s special education classroom and positions as a student volunteer.

“I kind of have always known. I just fell in love with the atmosphere, specifically in elementary school,” Gomez said. “It’s joyful, and friendly and exciting. I like the fact that I can continue to grow, because you learn a lot from your students every year, as well. They keep you young. They have this energy about them.”

Gomez believes students can benefit greatly from a balanced approach to their education. This philosophy is the cornerstone of her teaching method.

“I pretty much want the ‘whole child,’ instead of just picking parts,” Gomez said. “There are subjects that I enjoyed more as a student, but I try to make sure that I really get them all in there.”

But education, Gomez said, doesn’t have to end as soon as the 3 p.m. school bell rings. At the end of the day as they make their way beyond the classroom walls, there is one important thing she hopes her students will glean from their lessons:

“Being a good person is the most important thing you can do to help change our world and make it a better place,” Gomez said.