Who can beat Michael Jordan? 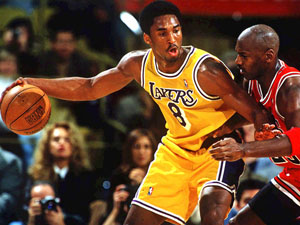 NBA fans have long debated who the best player in the game is, or who wins in a one-on-one matchup. Michael Jordan has added fuel to topic saying he would beat any of today’s NBA superstars in a solo matchup.

“I don’t think I would lose,” Jordan, 50, said. “Other than to Kobe Bryant, because he steals all of my moves.”

Jordan is the best basketball player to ever live. He has paved the way for the new generation of players just like Bill Russell, Magic Johnson, and Julius “Dr. J” Erving did before him. So how does Jordan in his prime stack up to against today’s superstars?

Kobe Bryant is hands down Jordan’s toughest competition one-on-one. Bryant mirrors Jordan’s game. He has perfected his patented turn-around fade shot from the base line, has hangtime, a killer instinct and most importantly, he is cerebral.

Bryant has an arsenal of offensive moves. If Jordan were to stop one, Bryant comes at him with a counter. If Bryant favored a side or move, Jordan would take that option away, but instead, defenders have to be more disciplined when defending Kobe.

The Black Mamba’s thirst for victory is stronger than anyone in the game today and rivals Jordan’s. This matchup will be a chess match and a battle of will. If these two played a best of seven series, Jordan wins 4-3 because of the ability to outwit his opponents.

At first glance you see James’ 6’8, 250 lbs stature too much for Jordan’s 6’6, 216 lbs frame to handle. You would assume James would use his strength and height to bully defenders, but Jordan does not back down from anyone.

James has one clear advantage and that is strength. But what good is strength if you don’t use it to your benefit? James is known for not using his strength consistently enough to gain a leg-up on his opponents. Instead, he tends to play with the ball above the three-point line and shoot jumpers. That plays directly into the hands of Jordan, an NBA Defensive Player of the Year winner and nine time NBA First Team All-Defense.

Jordan has studied and pointed out a flaw in James’ game.

“When LeBron goes right, he usually drives; when he goes left, he usually shoots a jumper. So if I have to guard him, I’m gonna push him left so nine times out of 10, he’s gonna shoot a jump shot. If he goes right, he’s going to the hole and I can’t stop him. So I ain’t letting him go right.”

James has a habit of taking possessions off to where he is not involved in the play. If he does that against Jordan, there is no hope. He does not posses the same hunger to win. When Jordan stepped on the court, it became personal.

James would lose to Jordan because he lacks the mental toughness. In a game of one-on-one, the element of going coast-to-coast or allowing teammate Dwyane Wade to pick up the slack is gone. Jordan would take James out of the game mentally.

Durant is one of the best shooters in the game today, but lacks the strength to battle against Michael Jordan. He is a guy who wants to shoot the ball, but Jordan’s quickness and strength would disrupt that ability. Durant would struggle to beat Jordan off the dribble, therefore not being able to create space to get off a good shot.

Durant’s height would allow him to shoot over the top, but Jordan’s defense would force him to shoot a contested or fade away shot, lessening their percentage of success.

Durant does not stand a chance versus the physical Jordan.

One-on-one is a different monster similar to how playoff basketball differs from the regular season. The component of being alone shows a player’s true colors. How does a player respond when all they have to rely on is themselves?

The NBA during Jordan’s era was played significantly more physical than it is today. While players would be able to match the physicality Jordan would bring, no player would be comfortable enough for it not to bother them.

Jordan is immortalized because of the heart and determination he brought to every battle and that is why nobody in today’s NBA would be able to outduel the greatest player to ever live.