Student, think critically – it may pay off 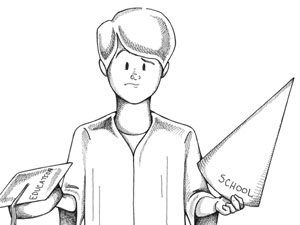 Mark Twain once remarked, “I have never let my schooling interfere with my education.”

Truthfully, for quite some time, I chastised such an absurd statement; I thought to myself, isn’t it well-known that school and an education are synonymous? That an education is received through schooling? Although this was my disposition for most of my undergraduate career, as I progressed through the system of our current-day university, I began to share similar insights as Mr. Twain.

As a former nursing student, I can recall taking the many necessary prerequisite courses, which were solely focused on memorizing information and regurgitating it back onto a Scantron during quizzes and exams. Ironically, I performed at an exceptionally high level and received top marks in all of my courses – I had learned to be the good student my professors expected me to be.

However, looking back, it saddens me to say that there was no progression in my overall being. None of the information being forced upon me carried any merit or significance and certainly did not require me to expand my mind, let alone think critically.

The current mentality society instills in students is depriving us of what a true education entails. Instead of encouraging us to engage in courses that promote critical thinking and self-actualization, we are being forced into majors that statistically have the greatest job demand in today’s workforce.

But wait. Isn’t that what trade schools are for? There is nothing wrong with being solely interested in learning a craft, in order to turn around and find work. However, those aren’t the ideals universities were originally founded upon. A university is supposed to be a place that promotes growth – a safe haven where students can explore their passions and pursue knowledge, an institution that exposes students to the great works of our world.

Unfortunately, here at CSUN, the idea of thinking for ourselves has been sabotaged and replaced with student learning outcomes professors are supposed to bestow upon us. Rather than representing the grounds of free thinking, administrations have taken the business model approach and shifted the idea of school into a contest of how much money they can raise from their consumers.

Recently, I have had the privilege of taking courses that are taught in a more authentic and unorthodox manner – where grades are irrelevant and the focus of the course is placed upon teaching the student to expand their horizons.

Professor Vincent Coppola of the philosophy department has pushed aside the pretension and encouraged us to “dare to know, dare to be wise, dare to really think with a life-affirming view.”

Coppola uses the Socratic method, challenging us, often using humorous methods to engage us and show that an education still can be obtained – in spite of the confines of the institution.

Unfortunately, despite the worthiness of such an enriching method, administration expects professors to follow their protocol and abide by their expectations of what ought to be taught in the classroom. Regardless what the administration, or even society is expecting of us, we must learn to think and fall in love with it!

More so than ever, double majoring, minoring, or even taking additional courses for the simple sake of pursuing various passions has become frowned upon and a taboo in our university. As students, we are being capped at a certain number of units and are practically being forced out of the institution, ready or not. Instead of growing minds, we are being treated like numbers, expected to rapidly go through the system so the next can come in.

Ironically, a recent article published in “The Chronicle of Higher Education” states that “employers are looking for recent graduates who can critically and creatively think, and communicate effectively both orally and in writing.” In addition, these same employers responded that they are far less interested in students who received “narrow training and industry-specific skills.”

Reality proves that skills pertaining to specific jobs can always be learned; however, well-roundedness and holistic thinking is a trait that is developed over time. Moreover, as students, if this is what our future employers are thinking, why haven’t universities joined this movement and encouraged overall student development?

During his Stanford commencement speech, Steve Jobs shared with his audience that within the first few years of his college career, he made the decision to drop out because he felt he wasn’t getting anything substantial out of his schooling. Instead, he made the effort to sit in on classes he was genuinely interested in. In particular, he immersed himself in a course on various typography – a subject that didn’t seem to have any benefits in the job market, but forced him to expand his mind and think critically.

Rather than focusing on how typography would benefit him in the future, he decided to follow his heart and do what he loved. Ten years later, Steve Jobs was able to incorporate what he learned into engineering Apple computers.

I believe this is a valuable lesson to be learned – that although critically thinking courses may not provide immediate gratification, they certainly benefit us down the road.

It is our right as students to freely pursue education and explore various fields of study. Rather than being stifled with the hype of administrative and societal standards, students must regain their freedom to expand their horizons and receive a fruitful education.