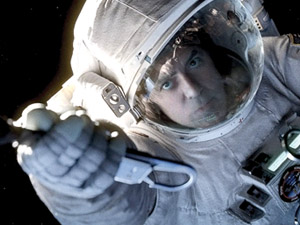 “Gravity,” Alfonso Cuaron’s follow up to “Children of Men,” is an excitingly peculiar film. Half one-woman stage piece, half human drama set in space rendered across a dark and cold desolate sky. It’s a glorious achievement in filmmaking and a precious piece of imagination in the age of obligatory superhero reboots, worn out sequels and the 3D renditions that come with them. It’s also one of a few Hollywood films to be released this year that’s based on an original script.

What makes “Gravity” so special is the combination of all the cinematic variables that make it work so well. The film is as minimalist as it comes. Featuring the performances of two characters and clocking in a little over 90-minutes (and that’s including credits). Most excitingly, it features somewhere around 200 cuts with the opening shot lasting, at least by my estimates, 10 minutes.

Sandra Bullock plays Dr. Ryan Stone, a quiet and reserved Bio-medical engineer on her first space shuttle mission, accompanied by Matt Kowalski, played by George Clooney, a talkative and witty veteran astronaut on his final mission. All seems happy-go-lucky till the film kicks into gear when the team is informed that debris from a Russian anti-satellite test has gone awry travelling at lightning speed towards them. The crew must stealthily avoid the debris before running out of oxygen and time.

The tenet of cinema has always been to create immersive experiences and “Gravity” is that rare, intimate human story that reminds us about the power of imagination while giving us hope for the future of films. Television serials of late have been lauded for reinventing the wonderment of on-screen narratives and when we all thought the freshness of movies was long gone, “Gravity” comes along and smacks us in the face.

The true power of the film is Sandra Bullock’s performance, whose plight to survive mirrors, though in a tamer fashion, the one James Franco endured in “127 Hours”. It’s not quite as gut wrenching, but she gives what I’m sure many will agree is the best performance of her career. There are those moments when she’s all alone, panicked, lost, wrapped in self-doubt with seemingly nothing to live for and we’re right there with her. It’s visceral but not overly dramatic. That’s the power of Alfonso Cuaron’s direction and his take on 3D.

Cuaron is in a league of his own. His career has seen him breathe life into cinema with energy and freshness. He’s a humanist who knows what to do with characters, putting them first before plot and cinematic tropes. His take on “The Prisoner of Azkaban” changed the texture of the “Harry Potter” franchise. One of my favorite films is “Y Tu Mama Tambien.” Not to mention the deeply engrossing “Children of Men”.

“Gravity” is not a perfect film but it certainly comes close. In the end it’s a successful new age cinematic experiment that bridges the gap between what cinema was made for and what it can still become, leaving enough space for us to wonder exactly where movies can go from here.