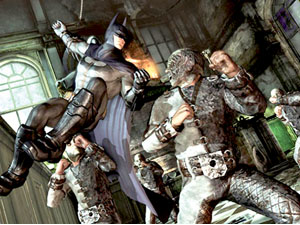 Gamers flipped on the bat signal, and a certain masked hero answered. In a month, the Dark Knight will return to the world of console gaming and give fans a chance to save the city of Gotham once again. “Batman: Arkham Origins” features a younger, rougher hero on a journey to become the world’s greatest detective.

It’s Christmas Eve and Bruce Wayne has a long night ahead of him. Villains such as Black Mask, Deathstroke and Bane make their first appearance and begin defining the relationships that will shape Batman’s future. While there is no Catwoman in this game, since she is still just Selina Kyle at this point in the timeline, there is a new female villain, Copperhead. This assassin will be one of many the Bat will face off against. The events of the night will test his morale and push him to the limit. This Batman is a vigilante in training, a newcomer, trying to save the city he loves from the grips of Gotham’s criminals.

The excitement over “Arkham Origins” was met with some confusion as it was announced that Warner Bros Montreal, not Rocksteady, would be developing the game. Of course, Rocksteady has given the game its stamp of approval, but until the game hits shelves on Oct. 25, no one is sure if it can live up to the previous Batman titles. Another big change in the series is that the Joker will not be the main villain. He will still face off against the Bat, but will not be seen throughout the story as he was before.

The Arkham series has been hugely successful, with “Batman: Arkham Asylum” and “Batman: Arkham City” both winning Game of the Year awards. Rocksteady developed both titles and created a Batman that was worth caring about. These weren’t mere arcade games, these were games that had strong storylines, engaging combat features and intriguing puzzles.

“Batman: Arkham Asylum,” released in 2009, is set in the temporary holding facility where many of Gotham’s villains are being held. Joker allows himself to be captured and take hold of the asylum, warning that any intervention will lead to bombs detonating throughout Gotham City. Batman must fight his way through Joker’s men, as well as other inmates, to rescue Commissioner Gordon and thwart Joker’s plans of destruction.

“Batman: Arkham City,” released in 2011, starts with Wayne getting himself arrested and put into Arkham City, the new prison facility section near Gotham, to investigate Hugo Strange. Throughout the game, Batman uncovers political corruption, plans of massacre and a handful of other vile things. The storyline gets tighter as the Joker infects Batman with a lethal disease that forces the Dark Knight to work with some of his enemies to find a cure.

Robin/Nightwing gets a DLC story mission, which gives players the chance to learn more about the character. The game is full of side missions and Riddler puzzles to solve, making it fun to play even after the story has been completed.

Gamers and critics alike are hoping for another Arkham hit with “Batman: Arkham Origins,” and if all goes well, the Bat will be in the running for another Game of the Year award. After all, the billionaire playboy has a habit of getting what he wants.