“The Walking Dead” returns Sunday, but needs a stronger pulse 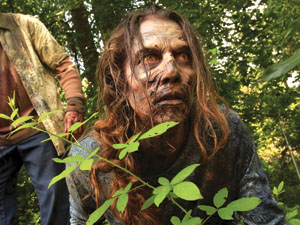 What do you get when you mix a bunch of bitching adults, virtually only one likeable character, little to no scares and an occasional zombie or two? Disagree all you want, but the ugly truth is that AMC ratings juggernaut “The Walking Dead” is showing signs of fatigue when it should be hitting its stride. Now, before you start an apocalypse over someone bashing your favorite show, it’s important to keep in mind that this comes from a place of love. This is a show in need of a pulse (pun very much intended), but with the season four premiere looming, have the sins of seasons past already undone the series’ potential?

“The Walking Dead” premiered in 2010 and the end-of-days-zombie setup immediately turned some heads. The pilot was strong and represented a promising venture into the world of horror television; it was even pretty scary. While the notion of a long-running horror series was initially appealing, the question remained: can it sustain this premise? The answer has unfortunately been kind of murky.

The beef that most viewers commonly have with the show, besides having no scare factor, is that nothing really ever seems to happen. Honest fans will joke about most of the episodes being uneventful and tedious. To drive this point home, take a look at the Internet memes that came out after the dismal season two; Daryl not getting enough screen time, T-Dog getting no screen time, and most famously, Carl not staying in the house. Ask one of your friends what their favorite episode of that season was, and you can almost bet that it will be the finale; the one that finally got them off that pointless fucking farm.

Put-downs aside, the show does occasionally kick it into gear. Season three was an obvious improvement, but the show really had no excuse. It was scraping the barrel by the time Rick finally got around to acting like a real, stressed out human being and not some righteous cowboy with a badge of honor. Last season also took some initiative by showing us the true nature of a broken culture. The Governor, played with dead-eyed wonder by David Morrissey, exemplified what someone with charm in a sullen world could accomplish or more importantly, demolish. Despite his character betrayal during the season three finale, he was a formidable villain, with a sinister bag of tricks.

But before the praise goes too far, there was gaping wound in season three that has been festering since the start. The fundamental issue with “The Walking Dead” isn’t that it’s a horror show with no horror, or that the plot development usually takes multiple episodes to get going, or the usual lack of desperation, it’s that none of these humans feel human.

With the exception of Daryl, no one’s journey ever seems to stick. Rick spent most of season three brooding, and lashing out. Merle’s character arc, while noble, felt forced, as did Carl’s descent into cynical boyhood. Maggie and Glenn were teetering on monotony and Hershel — well, he’s only got one leg now — so his days are numbered. Even the Governor, who is almost immediately presented as a psychopath, wasn’t convincing when he ultimately became one. Odd, considering that his transformation, or lack thereof, should’ve been a no-brainer.

Despite this, the show isn’t entirely at a loss. There’s some obvious love from the creators who’ve been dealing with well-documented behind-the-scenes issues with showrunners. Glenn Mazzara, last season’s showrunner, was subsequently fired after producers were unhappy with his vision and shortage of material for season three. Frank Darabont, legendary film director who shepherded the series to television, was ousted after season two.

The series’ newest helmer, Scott Gimple, has been on board since the show’s inception, so has had the chance to see what worked and what didn’t with past seasons.

“I’m trying to take a greatest-hits approach and take the best of both those runs and run with it,” Gimple said, when asked by the Hollywood Reporter about his direction for season four.

If the newest season can find some sort of path, a direction that the show and its lost group of characters can stay on, then maybe, just maybe “The Walking Dead” will finally become worthy of its unusually large viewership. Because as of right now, these loyal fans deserve better.