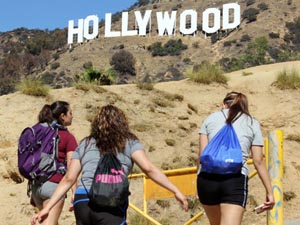 The Outdoor Adventures organization is offered by Associated Students Recreation Sports and gives students the opportunity to explore and learn about their natural surroundings. Many trips are available to students, ranging from trips to Castaic Lake, Eastern Sierras, Leo Carrillo Beach, Yosemite National Park and many more. These outings take place every weekend and range from day trips to three-day trips.

Outdoor Adventures hosted a hike on Oct. 5 to the iconic Hollywood Sign and Bronson Cave. Students hiked a total of approximately six miles with consistent views of the Los Angeles skyline.

The hike was led by four guides: Peter Chagnon, Ariana Cortes, Carolina Nolasco and Stephanie Lobos. The guides led a total of 18 students along the winding paths of the Hollywood Hills to the very top, where they experienced a great view of the Hollywood sign from behind. Students were then led in front of the sign for great photo opportunities.

Chagnon explained that the hike wasn’t too tough and was suitable for beginning hikers but cautioned students to take their time when trekking up the hill. He also explained that water was crucial and that snacks were just as important to stay fueled for the hike.

After leaving the sign, students were lead to the Bronson Cave, which is famous for having been the filming location for various movies and TV shows. Some of those include “The Scorpion King” (2002), various Star Trek series, “The Lone Ranger” TV series and the 1960s “Batman” TV series.

A few exchange students from Japan and France participated in the trip and explained that they wanted to visit one of the most famous landmarks in Los Angeles. For some, it was their first time in the United States and they wanted to do as much sightseeing as possible.

In this hiking trip, students had the opportunity to not only get good exercise but also see and experience LA in a way they might not have done before.

To find out more about upcoming Outdoor Adventures trips, visit their website www.csunas.org/oa/.