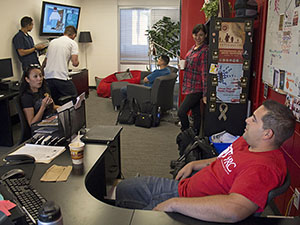 The Veterans Resource Center (VRC) added a military pun to the event title “Meet Relax Eat” or MRE, a play on the acronym for meals ready-to-eat distributed in the military, that took place last Tuesday.

The goal of this weekly event is to create a network of like-minded student-veterans and give them a place to unwind.

David Guzman, a Marine Corps veteran, is a senior majoring in business management and clerical assistant at the VRC. He said he comes to the meetings to be around people on a similar path.

“The VRC makes a difference in transitioning from the Marines,” Guzman said, “It gives me somewhere familiar to be and interact with those who may have similar experiences.”

Located in the University Student Union, the VRC is a place where CSUN veterans can come to find connections while they make the transition from military service to the academic lifestyle.

Students who are not veterans are encouraged to come by and socialize as well.

Graduate student and public administration major Correy Kitchens comes to MRE meetings just to grab a cup of coffee and hang out with friends.

“I’ve thought about the Navy before because I have family member in the service, but I came because I was invited by a friend,” Kitchens said.

Upon enrolling at CSUN, Kitchens was able to find employment at the VRC, which also allowed for a smooth transition to the academic setting.

Both veterans and active-duty service members attend the weekly meeting and make connections through shared experiences.

Senior and public health major Laura Hurtado is currently a member of the Army National Guard who regularly stops in the VRC for the MRE meetings. She likes the direction the meetings have taken in comparison to last semester.

“It was a bit more formal of a meeting last year, with round table discussions each week,” Hurtado said. “Now it’s a lot more casual with open dialogue.”

Hurtado emphasized the need to dispel the stereotype of the military being unapproachable and over-intense.

Instead, Hurtado said the VRC was a place where veterans, active-duty personnel and civilians could come together and meet on a level plain.

The weekly meeting averages about 13 people at a given time and anyone is invited to stop in for fresh coffee, cookies and pastries.

Though the VRC meetings are only on Tuesday nights from 5-7 p.m., the VRC also hosts educational and career workshops.

Along with the free coffee and baked goods, the VRC provides student veterans with support services and resources, including peer mentoring, support groups and community-building events.

The VRC is student run and is financed through student university fees.