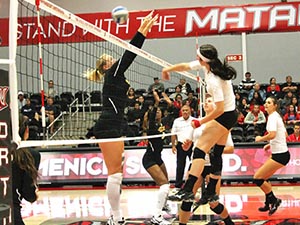 CSUN survived strong play by the 49ers in the first two sets and pulled away with the victory by winning the last two sets with strong play at the net and timely kills.

The 49ers trailed closely throughout the first set, as the Matadors never pulled more than five points ahead on their way to winning the set 25-22.

Long Beach came out determined in the second set, jumping out to a 6-2 lead early behind big kills that energized the Long Beach State bench.

“They played a lot harder than the first set and I think it just startled us a little bit,” said senior setter Sydney Gedryn, who recorded 41 assists for the Matadors.

The Matadors buckled down and answered in the pivotal third set by jumping out to an 11-4 lead.  Despite a 49ers rally that tied the score at 12, a 9-0 Matador run and poor hitting by Long Beach State sealed the third set for the Matadors.

The fourth set was plagued with errors, and both teams suffered through poor hitting in a back-and-forth affair.

The highlight of the match occurred towards the end of the set, when the 49ers and Matadors were locked in the longest rally of the match at 21-18.  After almost a minute of consecutive play, Gedryn set up a Hinger kill that the 49ers never recovered from.  The Matadors would win the set 25-19.

“We kind of had a little bit of a mental breakdown, but we pulled back through obviously,” said Gedryn, referring to the second set of the match.  “I think we just came back together as a team, played for each other, and just started playing our game and didn’t let them lead the match, we took control of the match.”

Despite the 49ers’ poor hitting late, the Long Beach squad fought hard throughout the match and was led by freshman outside hitter Joy Miley, who recorded a career-high 13 kills.

“I think a win over Long Beach is always really good, they always have a good team,” said Hinger, whose 10 kills often swung the momentum during sets.  “I respect that team so it’s good to beat them.”

Coach Jeff Stork was pleased with the win, despite some concerns over the consistency of the Matadors’ passing and serving in the match.

“Long Beach is a little unorthodox in what they do, […] so the fact that we got through something that was completely different I think is significant,” Stork said, explaining the 49ers’ unique offensive style.

The Matadors will look to extend their unbeaten streak in conference play on Saturday, when they host UC Irvine.