Men’s Soccer: No. 4 Matadors fall to UCSB 2-1 in overtime 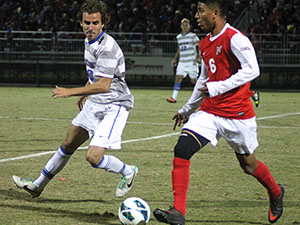 An early first half goal convinced the Matadors (10-2-0, 2-1-0) the victory was theirs, but UC Santa Barbara (8-4-0, 3-0-0) was able to steal the game on a penalty kick in the dying seconds of overtime, Friday night at Matador Soccer Field.

After falling behind in the fifth minute of play, the Gauchos turned up the pressure and mounted a comeback thanks to an opportunistic set piece late in the game.

“Santa Barbara’s a good team, they’re resilient, they throw balls into the box, they’re very dangerous on set pieces and we have to do better against teams like this,” said head coach Terry Davila.

Junior forward Sagi Lev-Ari opened up the scoring for CSUN just over five minutes into the game.

A through ball from senior midfielder Carlos Benavides made its way to freshman midfielder Juan Samayoa on the right side. Samayoa then crossed the ball into the box and found the head of Lev-Ari for his ninth, conference-leading goal of the season.

“It’s the best thing in the world (to score goals) but my team worked hard and without them I couldn’t have scored,” said Lev-Ari.

Despite taking a 1-0 lead, the Matadors were heavily outshot in the first half (8-3) and couldn’t have held the lead without a big contribution from sophomore goalkeeper Adam Hobbs.

In the 32nd minute, Gauchos midfielder Nick DePuy sent a promising header toward the top left corner but Hobbs was able to punch it over the crossbar and preserve the lead.

UCSB kept its foot on the gas pedal in the second half, pressing Northridge and creating chances for themselves.

Just nine minutes into the half, Gauchos defender Peter Schmetz headed a dangerous ball towards goal which was parried by Hobbs.

With time winding down in regulation, the Gauchos were awarded a free kick near midfield.

“Every time you score a goal in the beginning of the game the other team is going to come at you with all their weapons, they pressed us high and scored their goal from a set piece,” said Lev-Ari.

Each team managed to get a shot in overtime and possession remained fairly even.

With only eight seconds remaining, Northridge was flagged for a questionable handball inside their box, giving the Gauchos a penalty kick.

Achille Campion converted the penalty, beating Hobbs to his left and completing the comeback.

This was the first lead of the season the Matadors failed to hold on to and their second loss on the year.

CSUN will look to bounce back when they host Cal Poly on Sunday afternoon as part of a CSUN double header with women’s soccer. Kick off is scheduled 40 minutes after the women take on UCSB at 4 p.m.

Despite the heartbreaking loss, Benavides is optimistic his team can bounce back and right the ship.

“It’s just one loss, were just going to keep doing what we always do, practice, get better, work hard, and look at the next game as the biggest game of the year.”