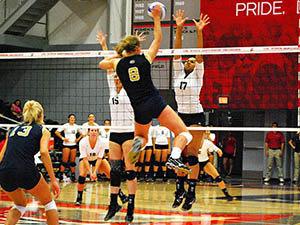 With their first win against UCI since 2011, the Matadors have pulled ahead of Hawai’i in the conference standings, who lost to UC Santa Barbara on Friday for their first conference loss.

CSUN’s attack was was sufficient enough, as the team had an average .248 hitting percentage. Sophomore middle blocker Cieana Stinson had a match-high 13 kills, while junior opposite hitter Natalie Allen recorded a double-double, collecting 11 kills along with 12 digs.

UCI’s victory in the first set and large early lead in the third set may have been a cause of concern for CSUN, but the Matadors recovered and won their last set by a comfortable margin.

The Anteaters jumped out to a quick five-point lead to open the match, and never saw their lead dwindle below five points throughout the set as the Anteaters won 25-19.

Stinson said the Matadors were slow starters, but their improved play in later sets sealed the win.

“The first match was kind of rough, but we picked up our passing in the second, third, and fourth [sets], so it really had a great outcome for us,” she said.

The Matadors had a team-high .333 hitting percentage in the second set, which paved the way for a CSUN win to even the match at one set apiece. The Matadors won the last eight points of the match, highlighted by a couple of big kills by Allen.

Much like Long Beach on Thursday night, the UCI squad came out strong in the third set, pulling ahead to an 8-1 lead, forcing an early CSUN timeout. The Matadors chipped away at the lead and ultimately took set lead over for good after a kill out of a timeout by senior outside hitter Mahina Haina put CSUN up 18-17.

By the fourth set the Matadors were cruising, as they were up by nine points several times throughout the set, winning the deciding set 25-16.

Head coach Jeff Stork said conference competition, despite their records, have stepped up their game when playing CSUN lately.

“CSUN is a marked target within this conference,” said Stork.  “We’re not to the point where we can be sloppy and win, we have to make sure that we prepare ourselves well.  Obviously Irvine stressed us early, and we responded back in sets two, three and four,” he said.

Although they were quick to admit that it was early in the season, the Matadors expressed their content in reaching first place in the conference.

“It’s a nice feeling, all your hard work pays off so it feels good,” said Haina, who recorded 11 kills for the Matadors. “We’re definitely not going to take it lightly, we want to stay here so we are going to work really hard to keep us here.”

The Matadors have a weekend road trip with matches at UC Santa Barbara and Cal Poly before returning home to host ranked Hawai’i on October 24th.