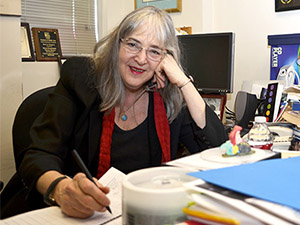 When cinema and television arts professor Alexis Krasilovsky couldn’t afford to eat a meal while in college, she did what she said many students do.

Several years later, she found herself at a party for the Dhaka International Film Festival in Bangladesh. After being allowed to only interact with embassy people, rather than natives who had been displaced due to a recent fire, she thought of an idea for a new film and a story she felt had to be told.

“I began to think about the disparity; it’s such a poor country,” Krasilovsky said. “That stayed with me.”

That story is “Pastriology,” a documentary exploring pastry traditions in different parts of the world while also shedding light on areas where people not only cannot afford to eat a pastry, but don’t even know what one looks like. It is a fusing of footage shot in eight countries by multiple directors.

“Let Them Eat Cake,” the shorter version of the documentary, is set for a sneak preview in CSUN’s Elaine and Alan Armer Theater on Monday.

Krasilovsky said she never intended to make documentaries, yet her previous film “Women Behind the Camera” won multiple best documentary awards, according to its website. The movie focuses on female filmmakers from around the world and is based on Krasilovsky’s book by the same title.

As one of the first female students allowed to attend Yale University, Krasilovsky wanted to address the “silencing of women” at the time using the universal language of film.

“I found that in order to tell [my] stories the way I wanted to, it wasn’t enough to just write them,” Krasilovsky said. “I had to direct them and produce them.”

Existing in a male-dominated industry, Krasilovsky feels something should be done about the “abysmally low” number of female writers and directors.

“I think it starts with education,” she said of reasons why there are not enough women in filmmaking. “It’s really important to have a diversity of faculty so we have more role models for the students. We have to have a diversity in the curriculum of the examples of works that are shown to the students so that they don’t feel the formula is the only thing out there.”

Krasilovsky has taught at CSUN for over 25 years, a milestone that surprises her.

“I had no clue that I would be going into teaching much earlier in life, [but] the people were so nice [at CSUN] compared to the backstabbers in Hollywood whom I had been interviewing with and/or working with that I thought, ‘Gee, this might be a nice thing to do — for a while,’” she said. “I never dreamed that I would be here 25 years later.”

Krasilovsky feels being an educator makes her think more directly about issues, and her role at CSUN makes her filmmaking more personal.

One of those students is junior screenwriting major Shannon Hourihan, Krasilovsky’s intern for “Pastriology.” She started working with Krasilovsky by staying after a film class to inquire about the internship opportunity.

“She’s very passionate,” Hourihan said of Krasilovsky. “I’m very impressed with just how much she has on her plate and how hard she works. It’s constantly inspiring.”

Joel Krantz, CTVA professor at CSUN, edited sound for Krasilovsky’s film. Although he doesn’t normally work on documentaries, Krantz learned a lot by working with her.

“It was a good experience to just work on her documentary and see how she did things,” he said. “She’s really a talented director.”

Krasilovsky finds her ability to help her students get past professional obstacles to be the most fulfilling part of her career.

“To be able to overcome some of those issues in my own life and to teach some of my students to overcome those issues — how to break through as an unknown, how to avoid sexual harassment, how to listen to your inner voice and tell real stories instead of just going for the surface gloss — that has been immensely rewarding,” she said.