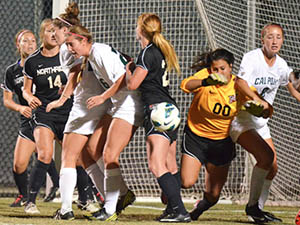 The Gauchos were able to capitalize on a turnover deep in Matador territory 13 minutes into the game. Senior defender Chloe McDaniel made an errant pass that was stolen, leading to a one-on-one with sophomore goalkeeper Cynthia Tayfoa.

Tafoya was able to make the save, but CSUN was unable to maintain the rebound and forward Allie Ariniello scored on an empty net.

That was all the Gauchos needed to secure their second Big West Conference win and sustain the shutout.

Not everything went bad for the Matadors. They battled hard till the end in an evenly matched game. Both teams recorded 10 shots and five corner kicks, and had their share of chances.

“I think we just gave up a soft goal,” head coach Keith West said. “Sometimes when things are not going your way, and you give up a goal like that, it deflates you.”

West also said his team began chasing the game and getting out of their element after the goal.

The Matadors best scoring opportunity came in the final minutes of play when sophomore forward Lyndsey Preston found junior forward Hannah Wissler at the top of the box. Her shot skipped off the crossbar resulting in a goal kick.

“I think we have enough passion,” senior midfielder Haley Chee said. “We know what we need to do, we’re just not executing.”

A scary moment for the Gauchos came early in the second half when midfielder Kelly McGrath collided with a CSUN player and was writhing in pain clutching her knee. McGrath was eventually helped off the field and left the game on crutches.

Sophomore defender Hayley Greep described the game as an intense with multiple injuries and fouls.

“I think we just need to stay focused around the goal and take care of our chances and individual play,” said Greep. “As a team we are doing well on defense, but I think individually, like winning the 50/50 plays, we need to get better at.”

The Matadors have four Big West games left and according to coach West, the team needs to take initiative.

“From here on out, we just need to start believing in ourselves,” Greep said. “We need to believe that we can do it, and we all need to be on the same page in order to achieve our goal.”

With four games remaining, CSUN must start earning points to get into the Conference tournament at the end of the season. Only the top four teams advance and right now the Matadors are in last place with a road game against UC Davis coming up on Sunday.