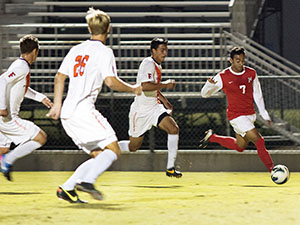 “We’re a high powered offense, we play great defense, we can create chances, and we’re a good team,” said head coach Terry Davila. “I’m happy about the way we responded, I wasn’t so worried about the early goal, we’re tough mentally and we don’t lose two games in a row.”

Despite setting the tempo and controlling the ball well, Northridge conceded the first goal of the game in just the 18th minute of play.

Mustang midfielder Matt LaGrassa picked off an errant pass near the 18 yard box and buried the ball past the right side of Hobbs.

“You give up a goal like that and its unfortunate, its unlucky, we had a turnover in the back line, but we’re not giving up goals in the flow of play,” said Davila.

It only took three minutes for the Matadors to respond with a goal of their own.

Junior forward Edwin Rivas received a pass up the right flank from senior midfielder Carlos Benavides. Rivas then sent a low cross inside the box where Lev-Ari out-muscled his defender and redirected the ball past Mustang goalkeeper Wade Hamilton.

The Mustangs attempted to regain the lead shortly after, peppering Hobbs with shot after shot, but Hobbs was able to stand his ground, blocking four quality shots on goal.

The only booking of the half was a yellow card awarded to junior midfielder Yarden Azulay in the 37th minute of play.

CSUN was outshot 8-6 in the first half but managed to put up five corner kicks.

The Matadors picked up right where they left off in the second half, stretching the Mustang defense with long but precise passes.

In the 57th minute, sophomore midfielder David Turcios sent a through ball to a streaking Beto Velasquez, sending him on a breakaway against the Mustang goalkeeper.

Velasquez was able to cash in on the one-on-one opportunity, beating Wade on his lower left side.

“We’ve been working in practice to get down the middle, I saw the run and I took it and David (Turcios) played a great ball,” said Velasquez. “I looked up, I saw the goalie cheating, and that’s when I poked it, if I would’ve taken an extra touch he probably would’ve gotten it.”

Lev-Ari sealed the win with a goal in the 65th minute.

Turcios received a pass from junior defender Mynor Giron near midfield, dribbled his way past the Mustangs defense and sent a pass to a wide open Lev-Ari for the easy tap in goal.

With the win CSUN remains atop the Big West South Division and will look to extend its win streak to two when they face an important divisional match against UC Riverside next Saturday.

Kickoff is scheduled for 7 p.m. at UCR Soccer Stadium.

Davila is confident his team can get a victory so long as they remain mentally tough.

“We feel that we can compete with anyone in the nation, we just have to have the mental edge, Riverside, Fullerton, and Irvine are our rivals, everyone of those games is big-there’s not much separation between us and we have to be mentally tough.”