LA AIDS Walk attracts a crowd of 25,000, including 250 CSUN volunteers 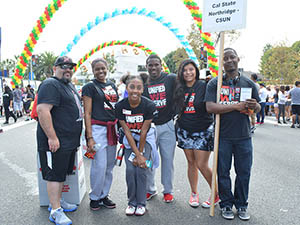 The crowd of 25,000 people met and surpassed their goal of $2 million by nearly 25 percent to benefit organizations like AIDS Project Los Angeles (APLA).

UWS rallied nearly 250 participants into five buses that left the G3 parking lot en route to the starting line in West Hollywood at 7 a.m. on Sunday.

“These walks are our steps to find a cure.  Some people don’t understand that the contributions here go a long way in making a difference,” said UWS committee leader, Amber Bynum, 20, a business law major.

With funds raised by the AIDS Walk,  APLA has the means to provide food, shelter and even dental care to those living with HIV/AIDS, by creating awareness of the disease through HIV prevention programs. The organization advocates and fights for HIV–related public policy to maintain a fair economic playing field for those who are living with HIV/AIDS and trying to make a living.

Long time AIDS Walk supporter and mayor, Eric Garcetti, gave a speech at the AIDS Walk opening ceremony. The mayor said that he lost a cousin to AIDS when the disease first came about. Garcetti said that we walk today so that one day we would have a walk that would have nothing to do with AIDS.

“That is our mission, that I look at the sea of angels, in the city of angels, walking one step at a time to let those living with HIV/AIDS know that you are not alone. We are here for you, we love you, we embrace you and we will find a cure,” Garcetti said.

There are more than 25 coalitions in addition to APLA that have been formed with AIDS Walk Los Angeles this year. In addition, clubs and organizations from high schools, colleges, private organizations, businesses and churches came out to fundraise and show their support in the efforts to fund both AIDS research and HIV/AIDS awareness programs.

UWS events assistant, Penelope Lopez, 21, a journalism major said, “This was my first AIDS Walk. There are so many people and it is great to see all the cultures, clubs and organizations from CSUN.”

In addition to participating at this year’s AIDS Walk, UWS raised monetary donations and collected deodorant and toothpaste for the homeless living with HIV/AIDS.

Augustín “Augie” Garibay, activities coordinator of clubs and organizations at the Matador Involvement Center, said that it is false to think that HIV/AIDS affects the LGBT community only.