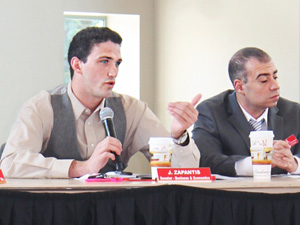 Following a heated debate, Associated Students (A.S.) voted not to pass an amendment awarding the Urban Planning Students of Northridge more than $1,000 for an upcoming event.

The Urban Planning Students of Northridge (UPSN), which is an organization that provides support to students in the urban planning field, requested $5,601 to fund their American Planning Association of Los Angeles student symposium. This event features speakers who present new ideas on urban planning with the help of posters.

The requested amount by the UPSN for the event was for a combination of things including room rentals, speakers, and a leadership workshop series, to name a few.

The amount suggested by A.S. Chair of Finance Sonia Vaswani was $1,000. However, Senator Joseph Zapantis felt that the organization and event deserved more funds in order to create a better experience. He suggested that $2,441 be donated to the organization instead.

“The event has such a regional impact on CSUN and I think it can really help us shine, ” said Zapantis.

Many of the other senators including Sarah Garcia and Jesus Martinez Ramirez as well as Vaswani and Vice President Talar Alexanian, opposed Zapantis’ amendment and felt that this organization in particular did not have a good history with spending money given to them.

“I encourage that we oppose this amendment due to incidents and past spending history with this group, ” Ramirez said.

Zapantis, on the other hand, said he believes in giving everyone a second chance and that the UPSN deserved a fair chance to regain trust with A.S.

“I made this amendment knowing that the spending history is not that good, but I happened to speak with a representative from the group and I got to hear how organized it is and sometimes there are reasonable causes that affect the budget. I don’t think it’s reasonable to shut down my amendment,” Zapantis said.

Amy Turnbull, UPSN president, said that she is aware of their bad credit history and that it is of no fault of their own.

“They felt our advertising should be limited to electronic signs on campus and our speaker fees were above that of other groups,” Turnbull said.

After voting, A.S. decided neither to grant UPSN the $5,601 that they requested, nor the $2,441 that Zapantis suggested.

Shortly after the debate over finances, Zapantis resigned from his position as the Business and Economics Senator on the A.S. board leaving the rest of the board dumbfounded. According to Alexanian, the board had no prior knowledge of his resignation.

“We did not know ahead of time that he would be leaving and now we are trying to fill his seat.  We are putting all our efforts forward to see who is available, ” Alexanian said.

Zapantis said he was offered a better position elsewhere.

“It (the new job) is a great opportunity and it is something that doesn’t just affect my school but my future as well.”

In other news, the Vex Robotics Club at CSUN spoke at open forum. They briefly gave an overview of the things they do as a club on campus and their joy for building robots. The club was granted their requested $1,500 for robotic mechanical parts.