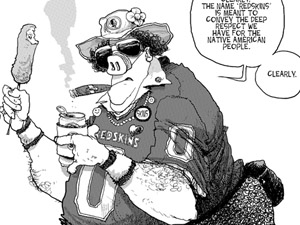 Although our society has made tremendous leaps in eliminating discrimination and inequality throughout the 21st century, one NFL franchise proves time and time again that ethnic stereotyping is not dead.

For 81 years the Washington Redskins organization (founded in 1932) has profited off a logo that is chauvinistic and racist toward Native American people.

According to the Racial Slur Database, the term Redskin “came from two places, the skin color, then the cruel torture of skinning Native Americans for a bounty. Since their skin was red they started saying ‘red skins.’”

What makes matters worse is that the Redskins operate out of Washington D.C., our country’s capital.

If America is synonymous with change and freedom then how can our country’s most popular sport promote an organization that perpetuates offensive, demeaning stereotypes?

Consider what would happen if tomorrow the Redskins changed their name and logo to the “Negroes,” “Chinks,” or “Spics.” There would be public outrage, civil right lawsuits and perhaps even riots.

An organization claiming to represent “strength, courage, pride and respect,” as stated by owner Daniel Snyder, should not endorse a racially offensive trademark.

So why won’t Snyder change the team’s name?

Because of the franchises’ 81 year history and the fear of losing his fan base (or his revenue) by adopting a new name (see the popularity of the NBA’s Charlotte Bobcats or New Orleans Pelicans).

Replicating a brand that has endured 81 years of success would be difficult, but Snyder wouldn’t have to change the team’s logo.

Other popular sports franchises that utilize a Native American moniker as their mascot have done so without conjuring offensive racial slurs.

If Washington was a viable contender for the Super Bowl – or at least the playoffs, Snyder would have no difficulty generating attention and revenue.

It’s shocking to think that a name which invokes the atrocious, horrendous treatment of Native Americans in this country (at the hands of our European predecessors) has taken so long to become a topic of controversy.

Although this issue has just surfaced publicly, protests and lawsuits have occurred in the past.

In a 1992 article from the Philadelphia Inquirer Charlene Teters of the Native American Students for Progress stated: “The fact that a football team in the nation’s capital could be named the Redskins in this day and age shows how pathetically ignorant this country is.”

Amanda Blackhorse, a 31-year-old Navajo social worker, was part of the group that petitioned to the Trademark Trial and Appeal Board to revoke the trademark to the Redskins name in 2006.

Blackhorse hoped the lawsuit would create a large enough financial debt that would force Snyder to drop the name altogether.

Even President Obama recently expressed his opinion regarding the Redskins in an interview with the Associated Press.

“If I were the owner of the team and I knew that the name of my team, even if they’ve had a storied history, that was offending a sizable group of people, I’d think about changing it,” Obama said.

Dan Snyder, if you want your franchise to reflect the values of “strength, courage, pride and respect,” please do this country and yourself a favor and change the name of your team once and for all.