Why Oregon should be ranked No. 1 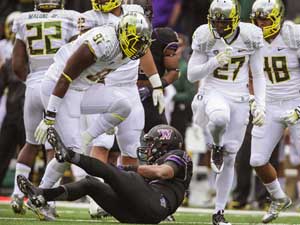 The University of Oregon Ducks are widely known for their high-octane offense and abstract uniforms. But the No. 2 ranked team in the nation, in the Associated Press and USA Today poll, has tied No. 1 ranked University of Alabama Crimson Tide in ESPN’s poll. It’s time for Duck fans to flaunt their feathers for the best team in college football.

Undefeated Oregon is known throughout the college world for their offense, and for good measure.  Amongst Football Bowl Series (FBS) teams, they rank second in yards per game, 630.5, and points per game, 56.8, and comes in at number three with 324 rushing yards per game.

Their offense does it all. They attack you through the air and on the ground and strike quickly too.

The Ducks offense is so simple, yet extremely complex. They do not have an abundance of formations, however each play has an arsenal of options and wrinkles. They run a spread-formation no huddle read-option offense where players line up relatively in the same spot each play. The coaches then signal in the play, offense goes off of quarterback Marcus Mariota’s read.

Talks about Oregon as the best team in college flourished Saturday when they beat then No. 16 Washington Huskies 45-24. The Ducks gained 631 total yards of offense against a defense that allowed 287.8 yards before Saturday.

Mariota, the Ducks leader, has numbers guaranteeing him the Heisman, barring an injury. In six games, he has completed 60.6 percent of his passes for 1,724 yards, 17 touchdowns, and oh yeah, zero interceptions. He has also rushed 41 times for 426 yards, an average of 10.4 yards per carry, and eight touchdowns.

Besides Mariota, the Ducks dominate their opponents with speed. Junior sensation De’Anthony Thomas, nicknamed the Black Mamba by rap artist Snoop Dogg, is one of the nation’s most electrifying playmakers. His blinding speed make fans sympathetic for defenders who have to try and tackle him in the open field.

Along side Thomas is freshman receiver Bralon Addison. Addison is so shifty he brakes defenders ankles attempting to tackle him. He is tied for second with six scoring touchdowns.

Oregon’s defense is vastly underrated. In six games, they have given up an astonishing 83 points. That’s an average of 13.8 points per game.

The Ducks rely on a quick and agile defensive line to put pressure on opposing quarterbacks. This pressure allows the cornerbacks to play aggressively by being physical with the receivers by bumping them off their routes to disrupt timing.

Duck fans have been defending defensive coordinator Nick Aliotti’s “bend, don’t break” style defense. Despite losing to Cam Newton and the Auburn Tigers in the 2011 National Championship game, the Ducks held the Tigers to 22 points. Last years Fiesta Bowl victory versus Kansas State University, a team said to be better than Oregon, scored a measly 17 points.

Say what you want about the Ducks, they are all offense and no defense, when it comes down to it, they battle any team put in their way.

With their two toughest tasks still ahead, No. 9 UCLA in Eugene October 26, and at No. 13 Stanford November 7th, a Thursday night game, the Ducks are set up to make a return trip to the BCS National Title game. All they have to do is win out.

There should be no doubt in any Oregon fan their beloved Ducks could not take down the defending back-to-back champions Alabama. Bama’s defense has shown weaknesses this year, and lack the punishing back like Mark Ingram, Trent Richardson, and Eddie Lacy they are accustomed to.

The Oregon Ducks will hoist the crystal football over their heads in Pasadena January 6, 2014.