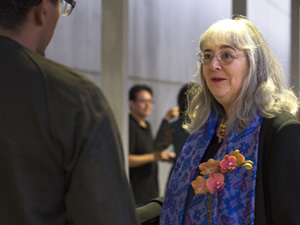 CSUN students, alumni, faculty and staff watched a Mexican baker recall seeing a mother comfort her wailing infant by feeding it Coca-Cola in a baby bottle on the screen of the Elaine and Alan Armer Theater. The documentary sneak preview “Let Them Eat Cake” juxtaposed images of poverty and malnutrition against images of lavish pastries and gluttony from 12 countries.

“I spend most of my day providing one on one counseling for all students here,” said Ellen Bauersfeld, dietician for CSUN Student Health Center, in the discussion panel after film preview. “In watching this film, it is amazing to me the parallels in terms of what our students face and what some of the other young people face across the world.”

For Bauersfeld, the Mexican baker’s story depicts a lack of education about health.

“Even though we (the U.S.) have so much education, there is often a big gap…I see a lot of students that really don’t know the basics. They do not know that the over consumption of certain foods can lead to obesity,” Bauersfeld said.

Bauersfeld addressed various points in the documentary that reminded her of the CSUN student population.

The images of starving people followed by close- ups of people taking bites of pastries displayed a disparity between the people who have an excess of food and those who have a scarcity of food.

According to Alexis Krasilovsky, the writer, director and co-producer of the documentary, the film’s purpose is to address issues involving those that have too much to eat and those that don’t have enough to eat.

“I also thought, how can we seduce people who are not social activists into thinking about some of those issues. I thought why don’t we seduce them visually through the camera and incite their taste buds with some of the finest pastries in the world then we could go into the ingredients,” Krasilovsky said.

The documentary also includes attitudes towards food by comparing a French child on a diet to a Los Angeles woman struggling with an eating disorder.

“There are a lot of students here with eating disorders from anorexia, to bulimia, to binging disorder,” Bauersfeld said.

Each of the stories from different countries are diverse in the way they discuss food. Dr. Dena Herman, nutritionist and faculty of the Family and Consumer Sciences Department, as well as a panelist at the event, interpreted the scenes from country to country as a way to create the connection between each of the stories.

“We are globally and geographically different places and yet we are very linked. The film brought to bear and helped us understand that our actions are the reactions and we are very tied together, whether it is in the sugar market, the cacao market, whatever these large agricultural markets are,” said Herman.