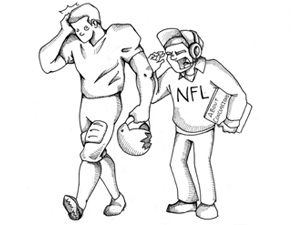 Before I ever watched an NFL game, there were the football movies. “North Dallas Forty,” “Everybody’s All-American,” “Any Given Sunday,” “Varsity Blues,” “Rudy,” “Invincible,” “Remember the Titans” – you name it, I watched them all.

As a European, I was fascinated by American sports, and these movies had a profound effect on me. I was stirred by the heroics of football players and coaches. By how the underdog fought his way to the top. By how teams rallied together. By how an injury could seem like a mere inconvenience for a player determined to will his team to victory.

Later I started watching the NFL. It was even better than what I imagined. The heroes, the villains, the blood, sweat and tears all played out live. Once the game is over, we return home with no bruises to show for our commitment to the game other than a sore throat, forgetting already that a wide receiver had gotten a nasty blow. While he leaves our mind, that player still lies tensely on a bench, waiting for the call on whether or not he is going to need surgery, if his season is over. Or, in worst case scenario, if this is the end of his career.

The reality for these injured players is more than a football movie, more than a fantasy football team and more than entertaining us week after week. It is deadly serious. For a long time, no one knew just how serious it was. Then the stories started appearing of how former professional players committed suicide. First it was Mike Webster in 2002, then Terry Long in 2005 and Andre Waters in 2006. In 2011, Chicago Bears defensive back, Dave Duerson, shot himself. Then 2012 came around and Ray Easterling and Junior Seau also killed themselves. What did these six men have in common other than being NFL players? Chronic Traumatic Encephalopathy (CTE).

CTE may sound complex but when you sum it up it is pretty simple. It is a disease of the brain found in athletes and others who have a history of repetitive brain trauma – that being concussions in most cases. The men in power of football did not recognize the dangers of brain injuries for a long time. It was not until 1994 a brain injury committee was established, and we need not look further for continued ignorance than 2010 where co-chair, Dr. Ira Casson, denied the connection between repeated head impacts and long-term brain damage.

So perhaps the league did truly not know the dangers? One could almost wish this was true. I wish that the organization of the NFL did not turn a blind eye to the overwhelming evidence brought to them by doctors and thereby did not consciously put players in danger. I wish they had the respect for players, families and fans not to be driven by money as is so often the case with sports. It is not pennies we are talking about here either. Between 2014 and 2022 alone, the league is set to receive $28 billion in media revenues alone from NBC, Fox and CBS.

To put this staggering amount of money in perspective let us consider the recent trial where the NFL settled in the concussion lawsuit started by 4,500 former players. The settlement means that the league agrees to pay $765 million for medical and related research. $765 million out of $28 billion. Let us do the math. That is roughly 3 percent granted by a league to its former players who gave, yes, their health and lives to the game. To say that the players do not carry some blame themselves would be naive and to put it in the words of former New York Jets defensive lineman, Marty Lyons:

However, it should not have been a part of the game. It should not be a reality that six of ten players suffer concussions.  And it certainly should not be a reality that the settlement means that the elephant in the room again is ignored and focus returns to the game. There is too great a willingness to forget instead of trying to fix the problem, especially among the media who are none too eager to return to the coverage of Monday Night Football. Trying to put the crisis back on the agenda, PBS just aired the documentary “League of Denial: the NFL’s Concussion Crisis,” which tries to answer the question of what the NFL knows and when it did know it. It is worth a watch and sends a strong message which I will echo:

For the love of the game, solve the concussion crisis.