CSUN Rock Climbing Club on their way to the top 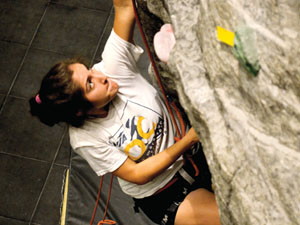 You stare up at the monolithic, gray, jagged monster as it stares back down at you. You can barely see the top of its head as it looms over your tiny human frame. You’re intimidated at first but you tell yourself you will at least attempt to overcome this seemingly daunting obstacle.

You stretch your arms, legs and core as you prepare to step up to and take on the SRC’s rock wall for the first time.

The climbing club was only established during the middle of the 2013 Spring semester, so this will be their first full semester. Many of the club members are new to the sport and some had never done any rock climbing before coming to CSUN.

“I started rock climbing when the SRC opened and had no climbing experience prior,” Garcia said. “I just started climbing and from there I genuinely enjoyed the sport and enjoyed getting stronger.”

Climbing can be intimidating at first but confidence is key to overcoming the initial hesitation of actually attempting to climb the wall and according to Garcia only 10 percent of the sport is physical while the other 90 percent is mental.

The mental aspect of climbing requires you to critically analyze the rock formation you’re climbing and requires the problem solving skills to plan and execute how exactly you will climb it according to Mary Ann Ferrer, club president and junior geology major.

“It’s about taking your time to look at the problem ahead of you, understand it, and from there to tackle it,” Ferrer said. “Patience is a big part of rock climbing. You’re not going to get it at first. You have to work really hard, as with any problem.”

The club was conceived last semester after a few SRC climbing regulars who became familiar with each other decided to get together and form a team to both compete, expand the community, and share their passion and experiences.

“I don’t think I’ve met a rock climber who wasn’t friendly,” said Tanner Dawson, club vice president, and junior jazz studies major. “Everyone’s super chill, down to hang, down to climb, and down to help everyone else.”

At their first meeting this year they had over 20 people attend and according to Ferrer they were excited with the turnout and their outlook going forward.

The club is constantly and actively looking for new members to expand CSUN’s climbing club and welcomes everyone with open arms . They encourage anyone who is remotely interested to approach the sport with a willingness to explore and learn, according to Garcia.

As with all sports, there is risk involved in climbing. It can be dangerous, so making sure new climbers are comfortable is about more than just them liking the sport but more importantly, highlighting safety.

According to Dawson, the sport is a lot safer than most realize and people shouldn’t let their fear of getting hurt hold them back from trying it. Dawson said that the ropes will catch those who fall and even then there are big padded cushions below as well as other people spotting each other.

The sense of achievement that comes with climbing is emphasized by its members and the lasting effect it has on them, especially when you’re new to it and are still grasping on to the fundamentals.

“Once you finish a route of a certain grade and difficulty, you feel very accomplished and it’s a very rewarding feeling to finish something you’ve been working on for a while,” Garcia said.

The rock climbing club partakes in competitive climbing tournaments against other Southern California schools but competition is not the club’s purpose.

“We want to do everything the right way and build everyone’s love for climbing,” Ferrer said. “Our major goal and main focus is to enhance everyone’s climbing ability and less about winning competitions although it’s nice to win.”

Some members have found that rock climbing has even translated into improvements in other aspects of their lives.

“It has really taught me to relax, let go, and get in a zone,” Dawson said. “I can take that skill and apply it to whatever else I’m doing whether it be music, homework, or spending time with a person, just zoning in and really focusing in on one thing and being hyper sensitive to what’s going on in any given moment. When you’re on the wall, that’s the moment.”

CSUN’s rock climbing club encourages everyone to give rock climbing a legitimate shot as it is very beneficial to the body and mind and has much to offer.