Students dream of a resource center 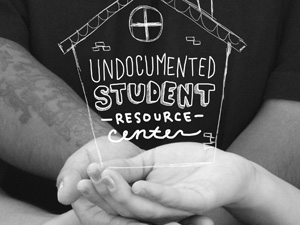 “Go back to your country!” is often heard from anti-immigrant activists. Phrases such as these have a long-lasting effect on students and society as a whole. Immigration has always been a hot-button issue that sparks passionate responses from both sides.

Some undocumented students are especially bothered by how the label “illegal immigrant” is used to describe them and the immigrant community. Some students came to the U.S. at a very young age, and took no part in the decision-making process. Many students and immigrants know no other home. The United States is their home, their country, more so than the country their parents are from. They cannot simply go back to their parent’s country as if it were their own.

Some people denounce the “illegal immigrant” label and argue that it is dehumanizing, while others are adamant that it is the rightful way to describe those who arrived in the United States by bypassing the government’s immigration laws.

“People want to make better lives for themselves and when using those words it is inaccurate as to why people come here,” said President of CSUN’s undocumented student advocacy coalition Dreams To Be Heard, Jesus Juvenal, 22, political science major. “They didn’t come to commit crimes. They’ve come to contribute.”

Undocumented students want to attend a university where they feel accepted and can study without the fear of being outed as undocumented and without fear of being harassed or worse, deported.

We all need to remember that it is human to move from place to place and not allow oneself to be confined by borders. The conservative mindset has fixed its position on the immigration issue as an “us versus them” fight. That mindset is dangerous and it is fueled by fear and hatred.

According to the FBI, there has been a consistent increase in hate crimes against immigrants. Civilrights.org attributes the rise in violence to the heated debate over a Comprehensive Immigration Reform. The media also continues to frame immigration negatively.

In order to really understand undocumented immigrants we ought to stop and ask why they came to the United States, and what goals they have for themselves and their family.

Many undocumented immigrants have college-age children who would like a fair chance at an education. They may want to pursue a career that will bring more meaning to their lives. In doing so, these immigrants are inadvertently bettering the lives of the people in their community.

We have needed a resource center for undocumented students at CSUN for a while now. It is time for that to become a reality.

At a Dreams To Be Heard meeting, journalism professor Jose Luis Benavides said, “The staff are concerned about the lack of resources. The university has sidestepped…there is a large number of Dreamers on campus. Why doesn’t the university serve them well?”

“CSUN can follow the example of UCLA and create the first Dream Center of the CSU system, which I believe serves a larger number of Dreamers due to its cost compared to the UC system,” Benavides said.

Benavides said that because Dreamers have already beaten so many odds by attending college, they are civic-minded and motivated to give back to the community when they graduate.

A resource center for undocumented students at CSUN is important because it will be an inviting space for students to find out more information about what it means to be undocumented and to have a place where students can go to get information on how to plan for their future. Many undocumented students have difficulty filling out forms that pertain to their education. With one of them being the AB 540 form that is necessary to attain financial aid.

Pablo Barerra, 23, an art major, said that if there was a resource center for undocumented students it would help potential freshman to continue to pursue their secondary education.

“It would have made such a difference to have an undocumented student resource center and not have to scout for resources. If you go to the office and ask for the AB 540 form, sometimes they don’t know what it is. If there was a resource center at CSUN I would feel as if our generation would have reached a milestone as far as becoming organized and unified,” Barerra said.

Historian of Dreams To Be Heard, Jose Rosas, 25, a Chicana/o studies major, also emphasized how important a resource center on campus would be.

“The undocumented student experiences constant marginalization and rejections among other challenges, and overtime these problem are internalized and ultimately affects the self-esteem or perspectives of students,” he said.

Hundreds of undocumented students graduate high school every year and many don’t continue a higher education, primarily because of a lack of awareness of available resources, Rosas said.

“So I envision a safe space for undocumented AB 540 students where they can get moral support and be provided with proper information. The resource center would bring a network of support to students and that will benefit their self-esteem which is crucial to achieve success,” Rosas said.

Taking into consideration that we have a resource center for the LGBTQ community (Pride Center) and a Veterans Resource Center, it would make sense that an undocumented student resource center would be next on the list. It is consistent with the idea that CSUN resource centers provide a safe space for an at-risk student population where students can gain the support that they need from a support network that would be within arms reach.